FIDE, the world’s Chess governing body has awarded Uganda’s 20-year old Elijah Emojong the title of International Master (IM) following his splendind performance at the Zone 4.2 Africa Chess Championship that was held in Cairo, Egypt from 29 April to 7 May 2013. Emojong finished the Zonal event in second position with 7.5 points out of 9, half a point behind winner Egypt’s IM Samy Shocker who had 8 points. Emojong won seven games, drew one and lost one against a formidable force of highly rated International Masters and FIDE Masters. His current FIDE rating is 2301.

The award of IM title to Emojong, the first for any Ugandan in history also makes him the first player in East Africa to attain the much coveted IM title. The award was confirmed by a FIDE official Baira Marilova in email correspondence to the Uganda Chess Federation on Monday 10th June 2013 in which she stated that “according to the results of the Zone 4.2 Chess Championship 2013 which was held in Cairo, Egypt on 29 April – 7 May 2013, Emojong, Elijah (ID # 10000402) is eligible to be awarded with the IM title.” Marilova later confirmed actual award of the IM title.

Emojong speaks about his IM title at subzonal and his future goals.

The highest award for any Chess player in the world in the Grandmaster (GM) title which is followed by International Master (IM), FIDE Master (FM) and Candidate Master (CM). Uganda gas four Candidate Masters including two females, five FIDE Masters and now one IM. Uganda Chess Federation is highly pleased with the title and hopes to continue nurturing the young player to transform him into a Grandmaster.

In a related development, Uganda is sending a strong contingent to Dar-es Salaam to participate in the Dar-es-Salaam Open Chess Championship that runs from Friday 14th to Sunday 16th June 2013. 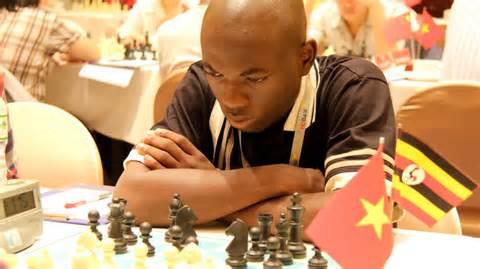 Emojong will represent Uganda in Tanzania.

The event will provide Emojong with his first taste of action as an IM as he is part of the contingent that departs by road for Dar tomorrow (Wednesday 12th June 2013). The other players are Haruna Nsubuga and Raphael Buti who alongside Emojong finished among the top four in the Uganda National Chess Championship held earlier this year.

The advance team to Tanzania will be led by UCF General Secretary, Christopher Turyahabwe. They will be joined by UCF’s Director Technical, Stephen Kisuze who will arbitrate the FIDE rated event as Chief Arbiter and UCF President, Vianney Luggya on Thursday 13th June 2013. Turyahabwe, who is also a FIDE Arbiter will be the Deputy Arbiter to Kisuze in the Dar Open.

The historic event has also attracted top British Grandmaster Nigel Short and a Woman Grandmaster from Romania among other IMs from Zambia and other neighbouring African countries. IM elect Emojong will be relishing the opportunity to face off with GM Short. There are lots of cash prizes at stake for the winners.

Owing to the above major event that is involving a number of Ugandans, UCF has postponed National Chess League games which were earlier scheduled for this weekend from Sunday 16th June 2013 to Sunday 23rd June 2013. Inconveniences caused to the players are highly regretted.