When is it possible to get +6 (7.5/9) in a tournament and not win? When you are playing in the African Zone 4.2 and playing in the same field as Samy “The Shocker” Shoker. That’s exactly what happened in Egypt when the French-Egyptian overcame an early loss to IM Ibrahim Labib to win seven in a row and the tournament with 8/9(!). Uganda’s Elijah Emojong set a brisk pace with a stunning 7/7 and after being held to a draw by FM Salah Yousry, he was set for a showdown with Shoker.

The game drifted into a Modern Benoni and was a tense battle heading for a draw when Emojong committed a tactical oversight and his king ended up getting caught in a mating net. The Ugandan jettisoned a piece to stave off mate, but Shoker simplified, collected material and secured the full point. What a thrilling ending! To have someone start with seven straight wins and another player end with seven straight wins is rarely seen. Unfortunately neither is competing in the 2013 African Championships. 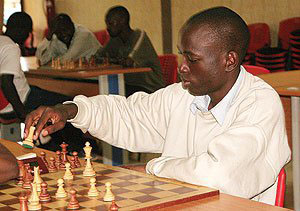 Elijah Emojong is awaiting conferral of his IM title.