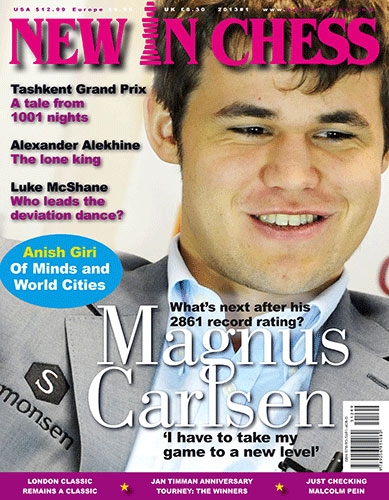 It’s official. Magnus Carlsen has broken the rating record at 2861 after posting another convincing win in London. He has since added to that count with a victory at the Tata Steel Chess Tournament and tops the chart at 2872. He graces the cover once again as he talks candidly about breaking records. Usually it is not good to focus on records, but Carlsen is in uncharted territory.

The London Chess Classic is quickly replacing the other marquee tournaments lost such as Linares and the 2012 edition did not disappoint. Carlsen got fours wins in first five games and held off a charging Kramnik. In the Tata Steel tournament, he was winning games in a variety of ways. In the cover article, there are some very interesting insights about Vladimir Kramnik including his secret chess therapy. You’ll be surprised! The pending Candidates’ Tournament will be interesting.

“The Nazi invasion of Poland occurred when Alekhine was leading the French team at the chess Olympiad in Argentina. Alekhine’s reaction was commendable: he called for a boycott of the German team in the press and over the radio. As a result technical draws were registered in three matches of the German team without play.”

Almost one-third of the issue was dedicated to the London Chess Classic which shows the increasing importance of the event. International Master Malcolm Pein did a superb job in its organization and the issue highlighted some of the behind the scenes aspects including blitz battles and endgame magic!

There is a very intriguing article on World Champion Alexander Alekhine is shown in a picture with his two cats! Sort of an introvert, Alekhine expressed his feelings over the board with some of the boldest chess ever seen. Maybe some was his pedigree.

We know he exasperated other grammar school student by his outstanding intellectual skills and individualism – he knew everything, never did any homework, was completely indifferent to social life and totally steeped in chess.

The story reads like a suspense novel with Alekhine escaping death by a firing squad during the Bolshevik era. The article mentions his four marriages and his epic match against Jose Raul Capablanca… and a later proposed matches against Mikhail Botvinnik. Neither happened of course. Some of the controversy surrounding Alekhine came from his political statements and the revelations are a fascinating read.

Other interesting accounts were the FIDE Grand Prix in Tashkent, Uzbekistan (won by Alexander Morozevich, Sergey Karjakin, Wang Hao) and Nigel Short’s article on his trek to play in the UAE for the World Cities Team Championship. (I’m not sure how players were picked to represent Chicago :-?) The World Cities tournament was covered in a separate article as was the World Mind Sports Championship… a wonderful event.

Anish Giri covers the Mind Games as a participant and writes in a fresh, but raw style. This tournament combined five different mind games (chess, draughts, go, xiangqi and bridge) and chess had three different discipline for men and women. Finally Hans Ree writes an interesting article about chess, psychology, investment risk and biometrics. A lot of food for thought.