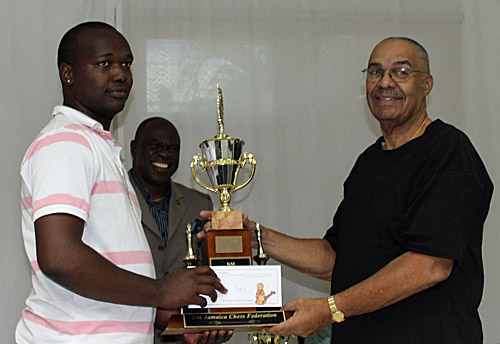 FIDE Candidate Master (“FCM”) and two-time Jamaican Chess champion Damion Davy proved too good for the opposition beating all whom he played to register a 5-0 clean sweep and take top honours in the 2012 Frederick Cameron Open Chess tournament. Second place went to the rapidly improving Andre Soares on 4/5, ahead on tie-breaks of former national junior champion Miguel Asher who also performed stupendously to score 4/5.

Soares, who did not face Davy his training partner in the “Group”, had a “break-out” event and was unbeaten with three wins and two draws, including victories over National Masters Daren Wisdom and Stuart James, respectively. The “best new player” prize went to visiting Lebanese Candidate Master Khaled Shehab who also scored 4/5, his only loss being to Davy in their pivotal round 4 marquee match-up. 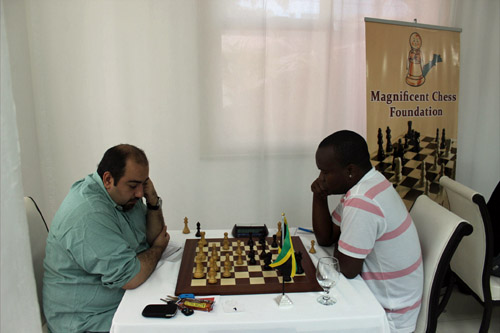 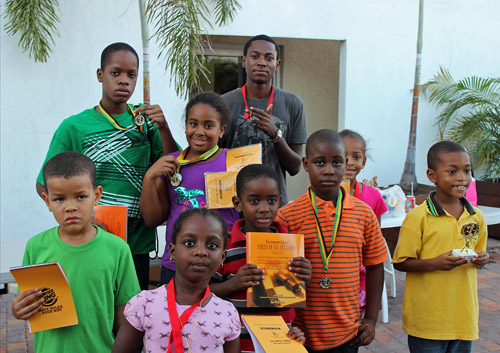 In the Amateur Section Nicolos Smith scored a perfect 6/6 to take top honours ahead of David Rose, Karl Graham, Lindberg Simpson and Chevaughn Henry all of whom were tied on 5/6. Rose and Graham took the silver and bronze medals, respectively, on the tie-breaks. In the under ten year-old section, Nicholas Lyn won the first place trophy while Milan Simpson and Jordanne Stewart took home the silver and bronze medals, respectively.

In the under eight year-old section, Kyle Forrester won the first place trophy while Linval Junior and Xander Grant earned the silver and bronze medals, respectively. In the under six year-old section the first place trophy went to Craig Grant while Jaden-Tyler Gayle and Kennedy Brown won the silver and bronze medals, respectively. The top prizes for the best girls in the section went to Milan Simpson, Jordanne Stewart and Soleil Simpson, respectively.

The tournament attracted more than one hundred (100) players and took place on December 22 and 23 at the Spanish Court Hotel. The chief sponsor was Magnificent Chess Foundation with co-sponsors being Spanish Court Hotel and Subway (Jamaica) Limited. The first event on the Jamaica Chess Federation calendar for 2013 is the John Powell Memorial Open Tournament. Venue and other details to be announced soon.