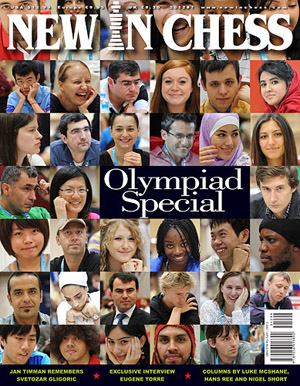 The Olympiad issue brings an exciting array of articles, but the cover speaks volumes. Never has New in Chess shown this much diversity on its cover or in its pages. Usually reserved for the top brass of chess the magazine has some interesting snapshots covering a myriad of nations.

The usual stars are showcased, but there are few non-descript faces such as IM Robert Gwaze of Zimbabwe and Ghada Al-Khulaifi of Qatar and Turkey’s wild-haired Burak Firat. There is also a beautiful shot by Macauley Peterson of Phiona Mutesi (The Queen of Katwe) along with her coach Robert Katende and their new acquaintance, American IM Irina Krush.

“Russia were playing really well, but no team can keep up this tempo. I was thinking that things might go wrong for them, it’s almost a natural law, you can’t play a tournament and crush everybody, especally now that Olympiads are pretty strong nowadays.”

The headlining story (of course) was Armenia’s triumphant gold medal victory, their third in the past four years. Olympiad tournaments have their share of stories (including Mutesi’s journey), but there is always a tinge of controversy. In this issue, Ali Nihat Yazici’s banning of Evgeny Surov, Garry Kasparov’s lobbying at the General Assembly, Vassily Ivanchuk’s nixing of pregame ceremonies and Nigel Short’s missive about sex at the Olympiad, this is certainly an issue with a potpourri of content.

The tournament was dominated by Russia at the outset, but a crushing loss to the USA dampened their hopes. While Russia-China-USA scored 1/2 against each other, Armenia slipped through in dramatic fashion. An interview with Aronian was featured. In fact Dirk Jan ten Guezendam interviewed him immediately following the Closing Ceremonies… a time where the feelings of victory were still fresh. A side controversy was the fact that Azerbaijan won the right to host the Olympiad in 2016 which may make Armenia’s participation very tricky. Both Armenia and Azerbaijan have traditional hostile relations.

There was a very handsome article on Eugenio Torre (left), one of the closest contemporaries of Bobby Fischer. Having played in a record 21 Olympiad tournaments, he actually served as a lightening rod in Philippines’ stellar performance. He annotates his win over another legend, England’s Nigel Short. Who knew that the cool and rather stoic talisman was also a singer? The more intriguing parts of the interview dealt with Fischer. Well done.

Nigel Short’s “Body and Mind Games” is quite an article to stir up a buzz. Perhaps this is what he wants. In the sunset of his chess career, Short is becoming more brazen and curt in his opinion and expression. This article discussed one of the most popular search terms on the Internet, “sex”. He opens by stating unequivocally, “Olympiads are all about sex.” While we will leave you to read the article for yourself, let’s say he gives some examples. He even makes a rather provocative statement offering to write his own salacious tome with names included. Maybe it is simply tongue and cheek? 😐