The plot is thickening as the titans are starting to clash. The USA looks strong with another convincing win over Venezuela 3½-½ with Kamsky, Onischuk and Robson winning. Robson, 18, is delaying his freshman year at Webster University and is making the most of it. The young star is 3/3 along with Kamsky. They will get India next, a team they defeated in Khanty Mansiysk.

Azerbaijan (minus Gashimov) are also looking strong with another 3½-½ romp over the overmatched Faroe Islands. They will meet Germany in round four. France kept pace with Maxime Vachier-Lagrave getting the win over Bulgaria’s Veselin Topalov and the 2½-1½ verdict. England beat Cuba 3-1 with wins by Michael Adams and Nigel Short. England will now play rival France in a regional battle. Playing without Luc McShane, England seems to be in good form.

The Ukraine nips 2010 bronze medalist Israel, but is falling behind on board points. Armenia also gave up another point while beating Spain 2½-1½. Both the Ukraine and Armenia have won the last three Olympiad titles, but stand at 9½ board points. Among the contenders, only Russia is lower with 9. Russia plays China and may serve as the marquee match. China has lost to Russia in 2010, but perhaps this the year of China. If Russia loses, they may have seen reasonable chances for a medal fading away. 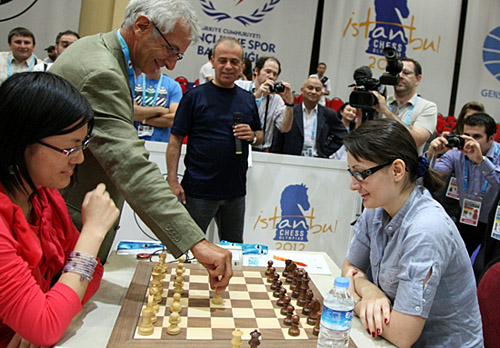 Opening move made for Hou Yifan who scored a dashing victory over Kateryna Lahno. Photo by chessolympiadistanbul.com.

In the women’s competition, China was held by the Ukraine trading wins on the top two boards. Mariya Muzychuk got Ukraine on top with a nice win over Zhao Xue who seemed out of sorts this game. World Champion Hou Yifan came to the rescue with an attacking win over Kateryna Lahno. While the bottom boards were draw, China was under pressure to draw even. On the top board, Hou chased the black king from g8 all the way over to b8 and ended the game with a nice skewering tactic to save the match. This is a minor setback for the gold medal hopefuls.

Georgia-Germany was a 2-2 draw with the teams trading wins on the bottom boards. Georgia, a medal hopeful, is hoping to keep pace with the leaders. Meanwhile India has vaulted to the top position, despite the absence of top player Humpy Koneru. They bested a tough Armenian squad by the slim 2½-1½ margin with Tania Sachdev getting the margin of victory. Russia crushed Mongolia (the nation of powerful names) after neutralizing the tough Batkhuyag Munguntuul. This was the first match featuring the Kosintseva sisters together.

The USA was “upset” by Uzbekistan whom they outrated on each board by 100 points and by as much as 200. This is certainly a setback for the American squad who hopes to be on the medal stand at the end. They get a stiff test tomorrow against Slovenia lead by GM Anna Muzychuk. France is doing well despite the absence of GM Marie Sebag and dispatched of Austria 3-1.