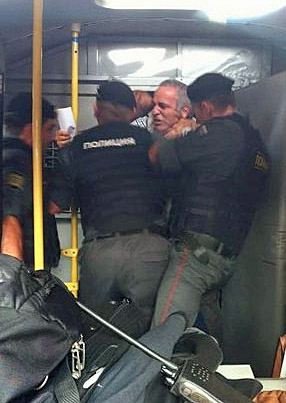 Kasparov being roughed up by Russian Police.

Former World Champion Garry Kasparov was manhandled by Russian police officers during a protest of the Pussy Riot trial. Kasparov was not officially taking part in the protest, but his fame preceded him in more ways that one. He has become notorious as a staunch opponent of Vladimir Putin whom he has claimed is rolling the country back to the old Soviet days.

This trial stemmed from an incident staged by Pussy Riot who were protesting against Putin’s policies in a famous Moscow cathedral. Since their arrest, the trial has been sort of a rally cry for pro-democracy advocates. Kasparov weighed in on the situation and was intent on attending the trial, but was rebuffed. He spoke calmly with reporters about the suppression of civil liberties. Police saw the interview taking place and accosted Kasparov, picking him up and forcing him into a holding bus. In another video, Kasparov then tried to leap over the officers off the bus, but he was caught, subdued forcefully and crammed back onto the bus. Russian authorities have claimed that Kasparov bit the finger of one of the officers and faces five years for this violation.

Starting at 0:50, Kasparov’s interview was interrupted by a police unit and he was hustled away into a waiting police bus. A massive struggle ensued as Kasparov kept asking why he was being arrested. He fell, but was crammed on the bus.

At 1:40-2:05 of this video, Kasparov leaped from the bus, was caught and subdued again. At some point, he was wrestled to the ground and restrained as one officer was braced on top of him with Kasparov screaming in agony. Update: Video has removed spitting on protestor and a hard slap after authorities snatched flag.

This act by the Russian police may provide more credibility to Kasparov’s political claims. Meanwhile, he has been released and received treatment at a local hospital. Kasparov was accosted once before during a campaign to unseat Putin back in 2005 as someone wacked him across the head with a wooden chess board. Unfortunately, chess players continue to be mistreated for various reasons. Bobby Fischer’s condemnation by Japanese authorities led to abuse and imprisonment for several months. Back in 2005, a young man whacks Kasparov over the head with a wooden chess board after saying, ‘I loved you as a chess player, but you are wrong in your politics.’ A shocked Kasparov watches as the assailant is hustled away.

The beating of Georgian Grandmaster Zurab Azmaiparashvili by Spanish police is a not too distant memory from the 2004 Chess Olympiad in Calvia, Spain. In that case, Spanish authorities claimed that the Azmai headbutted an officer. The crowd looked on at the closing ceremonies in shock and Spanish policed dragged him from the hall amidst horrible shrieks from his wife. 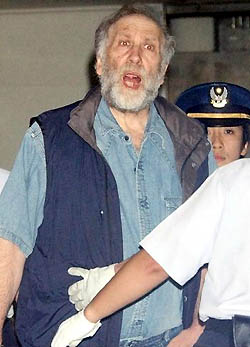 Fischer being detained by Japanese authorities in 2004.
He claimed that he was abused in the Japanese prison.

What does this say about the lack of respect for chess professionals? It says that while chess remains a popular sport around the world, its professionals have not earned the same respect in the public eye. What can be done in these cases? Some chess fans have written into ChessBase to call for a boycott of Russian chess tournaments and Russia as a venue. There is no certainty that is will solve the issue, nor would it be fair to the chess players.

Traditionally, the chess community has discussed these issues vigorously, but have never come to the defense of aggrieved players as a community. During Fischer imprisonment on false charges in Japan, there was no such protest of his brutality and mistreatment and very little for Azmai’s beating and detainment. Where will the next Kasparov saga lead? The Olympiad is starting in another week and he will most certainly be in the mix of political wrangling there. It will certainly be a lot safer in Istanbul than Moscow. Right?