“The biggest problem I see among people who want to excel in chess – and in business and in life in general – is not trusting their instincts enough.”
– Garry Kasparov

Some of the best quotes of the famous GM Garry Kasparov are so effective and it relates to every aspect of life. If we view the above quote, it can be said that over the last few months, a buzz in the chess fraternity has come to light.

Chess South Africa (CHESSA) has the honor to be a component of KCF as the signing of the Memorandum of Agreement (MOA) will be done at the launch of the African Chapter at the Sandton Sun hotel on March 23rd, 2012 where a dinner will be held in Kasparov’s honor. The partnership between KCF and CHESSA is significant in itself as chess in South Africa has been identified as one of the priority sporting codes which was recognized by the Minister of Sport and Recreation South Africa, Honorable Minister Fikile Mbalula MP. CHESSA has encouraged all the unions’ affiliated to them to join in this momentous occasion at the Sandton Sun Hotel. Recently, CHESSA signed a MOU with Moves for Life who was instrumental in the introduction of KCF to South Africa.

“In an age when schools are facing significant budgetary restraints, there is a greater need than ever to make chess available to as many students as possible. We’ve assembled the very best in chess education to develop a complete chess curriculum – K through 12. We’ve designed a program that encourages creativity, instills self-discipline and offers hope and a feeling of accomplishment to millions of children.” – Garry Kasparov on KCF.

The MOA will be signed by Emelia Ellapen, President of CHESS South Africa. Members of the Executive Board will be in attendance at the dinner. “Another significant chapter in the history of CHESSA and South Africa. We embrace this partnership and encourage South Africa to partake in this venture.” 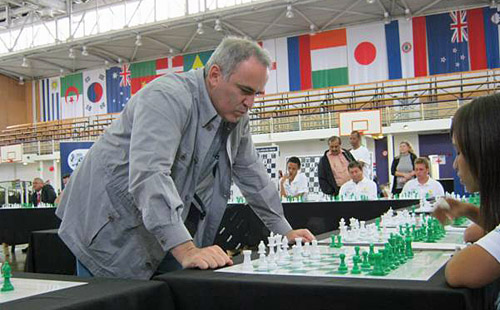 Kasparov giving a simul during his most recent visit to South Africa. He gave up one draw from 26 games. Photo courtesy of CHESSA.

Editor’s Note: Kasparov gave a simultaneous exhibition in which 26 players participated. Daniël Barrish scored the only draw on Kasparov’s offer, but the world champion won the rest! The event was held in Cape Town on Thursday 22 March 2012. There will be another simul on Sunday.