Take a few minutes to examine the three diagrams below. What is the common thread here? 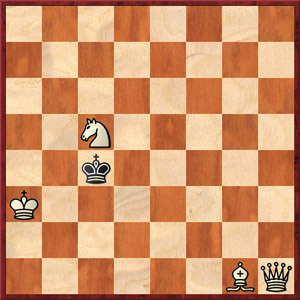 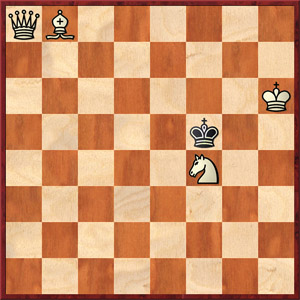 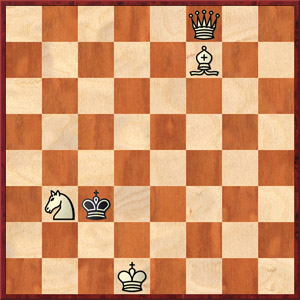 First of all, let’s assign author and date to the first diagram. No. 1 is by Wladimir P. Klipatschow and won a special honor in the 2006 Scheltonoschko-64 Birthday Tourney. It is, as are the next two, White to Play and Mate in Two. It is an aristocrat, which means a problem without pawns, only pieces, a miniature (less than seven pieces total), and also a black Rex Solus (Latin for the king stands alone) problem.

The second position is by Vadim Moissejew, and was published in Majak kommunisma in 1988. If you took a close geometric look, you’ll note it is Klipatschow, turned 180 degrees. The solution should be simple. The third by Niktopolion P. Kaschtschejew, Kijewskoje Radio 1965, is a bit different, but to a problemist, no less identical. The position is again turned, but also shifted by a rank. Here the queen sweep will be 1. Qa8!, and if you note the black king-flights, you will find the same mates.

There are known plagiarists who do this to the problems of others and pass them off as their own. Here I doubt any such intent existed, and each author probably thought he had a new creation. But since they are so easy to copy, it is also difficult to come up with a new idea in such uncrowded positions, particularly due to the lack of pawns. But anticipated they are, and in the case of Klipatschow, by over 130 years!

So what does this have to do with the Chess Drum and its various Drum Majors?

The exploits of Theophilus A. Thompson are probably well-known to the reader of these pages through this article by my friend Neil Brennen. If not, Thompson has his own Wikipedia page and his problem book is available for free on-line. About a year ago, I conducted an analysis of the composing potential of Thompson, and was favorably impressed, and hope to present those results in the future – perhaps Dr. Shabazz will let me serialize them here. One lack I thought I noticed was in his mate in two problems, which I attributed primarily to poor teaching. But I may have to revise myself based on the following:

Theophilus A. Thompson
Chess Problems, 1873
White to Play and Mate in Two 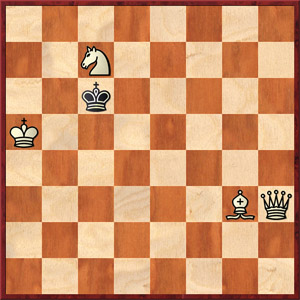 The key is 1. Qh8! Knowing the pattern of the three Y-flights, finding the three mates should prove no problem.

Being anticipated in one of your creations is always a let-down. You’ve put work and effort into finding a dual-free problem setting, in miniature in this case (economy is one sign of chess beauty), and in the case of one author, won a small honor doing so. But a potential master of composition 130 years ago, before computers, before even many African-Americans were allowed to be chess players and composers, found and published it. For that, our three “offspring” of Thompson should be proud, in my opinion, even if it stings a bit. Why Thompson stopped composing and playing so suddenly is still something of a mystery. Whether he would have become a strong player is something I won’t speculate on, but in my opinion his skill in problem composition, if allowed to flourish, would have made him one of America’s respected composers with no thought given to the color of his skin.