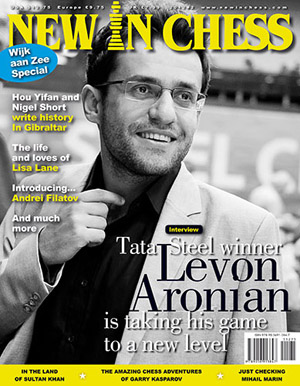 Levon Aronian graces the cover of the latest New in Chess in a very debonaire pose from his Tata Steel victory. With all the hoopla over Magnus Carlsen, Aronian has flown under the radar. His Tata victory places him only 15 ELO points behind Carlsen and in striking distance to claim the all-time rating record of Garry Kasparov of 2851.

There were other headline stories such as Teimour Radjabov, Hikaru Nakamura, Sergey Karjakin and Fabiano Caruana, the new guard in the top ten. Anish Giri represented an even newer guard and hometown hopeful. There were the steady veterans as Veselin Topalov and Boris Gelfand defended their ground.

Notable are Aronian’s brilliant black win over Giri. Very nice story! Following the Tate article was a candid interview with the Aronian including a few comments on his relationship with Filipina-Aussie Arianne Caoli. 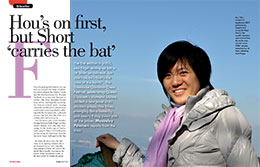 Hou Yifan has been in the news lately for her spectacular showing at the Gibraltar tournament equal first with Nigel Short. In this tournament she compiled a scorching 2872 performance accented by a win over Judit Polgar, considered the strongest female player ever. This game was annotated by Hou Yifan in her modest tone. This was followed by her near-miss in Reykjavik. The catchy title, “Hou’s on first, but Short carries the bat” was certainly a good find by Macauley Peterson who is more known for his videos than his wordplay. Despite Short’s win, the article took a decidedly Hou-centric angle.

There was a rather interesting interview with Andrei Filatov, the financier of the 2012 World Championship match between Viswanathan Anand and Boris Gelfand. The match was be staged in Moscow in May with a prize fund of $2,550,000. While this match has not excited the chess world, Filatov envisions the tournament as an opportunity to explore the artistic side of chess. The match will be set at the Tretyakov Gallery. 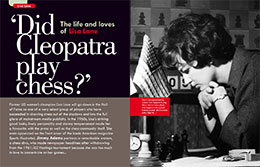 Perhaps the most intriguing article was the Jimmy Adams’ piece on Lisa Lane, the enigmatic American champion from the 1960s. In reading this account of Lane’s life, there are certain parallels that can be drawn with Bobby Fischer. However, Lane was a mixture of the Bohemian culture of New York’s Greenwich Village and flash of the Big Apple’s Times Square. Glamorous, but with a temper much more mercurial than Fischer, she trod a path around the world in search of success.

The veiled comparisons to Elizabeth Taylor’s controversial Cleopatra are apparent and Lane was dubbed “the most beautiful woman ever to play chess”. Her tour of Europe was met with great fanfare but fizzled out in disappointment. Much was made of her beauty, but her up and down career and the manner in which she withdrew from Hastings to pursue a love interest was likened to a artistic tragedy set on stage. Must read!