On the latest FIDE ratings, Magnus Carlsen still sits atop the rating chart at 2835 (+0), but the lead has narrowed to 15 ELO points. Levon Aronian’s (2820, +15) win at the Tata Steel tournament allowed him to surge forward and challenge Carlsen for the top spot and Kasparov’s 2851 rating record. Vladimir Kramnik (2801) and Viswanathan Anand (2799) held steady while Teimour Radjabov (2784, +11) established his hold in the top five.

The women’s list is getting a bit more interesting, but Judit Polgar (2709, -1) is still far ahead of Hou Yifan (2639), +34). Hou defeated Polgar at the Gibraltar Festival and capped off a spectacular performance scoring 8/10. Humpy Koneru (2589) is third with a surging Anna Muzychuk (2583, +3) on her heels. Muzychuk scored 8.5/9 at the European Women’s Team Championships. 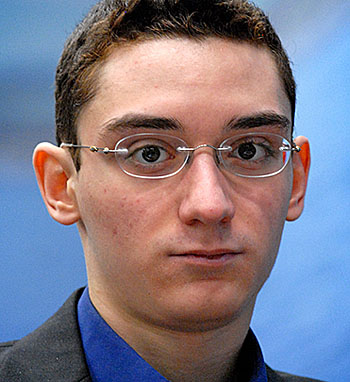 Seems not long ago that Fabiano Caruana (age 19) was running the halls of U.S. chess tournaments as a diminuitive phenom. Despite being the #1 junior player, he is also #7 in the world! Photos by Frits Agterdenbos of ChessVista.