Round #7 Analysis: Things are starting to heat up as epic clashes are revealing which teams will vie for one of the three medals at the 2010 Chess Olympiad. The Ukraine is the most dominant team having won all seven of their matches with Vassily Ivanchuk sitting on 6/6 and a 3382 performance. He won a spectacular game against Baadur Jobava to seal the win. (See Ivanchuk-Jobava) The Ukrainians have only one board loss in 28 games. They will face Russia 1 who are trying to keep medal hopes alive.

Armenia’s title defense took a setback when they fell to arch rival Azerbaijan. The two countries have had political tensions for decades and Teimour Radjabov came under fire for comments about the situation during the 2007 European Team Championships. However, the two teams greeted each other and sat down to engage in battle. 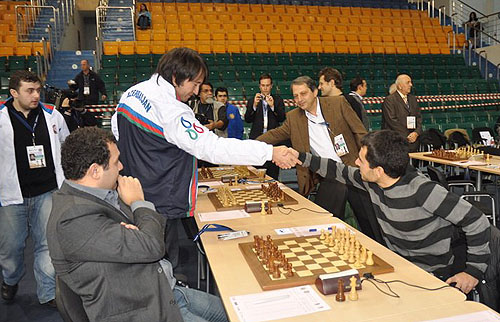 While it may be hard to believe any player could have anything put praise for affable and personable Levon Aronian, the Azeris seemed determined to put the Aronian-led freight train to a stop. They were successful. If the Armenians do not rebound after this loss, they’ve defended their Olympiad crown with valor. However, there is still time.

One tough battle in round seven was USA-Poland. Both have two young stars playing on top board. Hikaru Nakamura was hoping teammates would get some timely wins. His request was answered when Alexander Onischuk detitle Bartlomiej Macieja a crushing loss in 24 moves. Both Kamsky and Shulman equalized easily in their games. This put a tremendous amount of pressure on Radoslaw Wojtaszek to hold Nakamura with black.

The Panov-Botvinnik Attack essayed by the American gave him a lively position but something went horribly wrong. After 29.Ba2 Nf5, the black knights activated. Then with the 33…Ng4! shot, black wrested the initiative. Nakamura fought on, but eventually resigned and Wojtaszek’s win gave Poland a 2-2 draw. (See Nakamura-Wojtaszek) The USA will have a tough match against China tomorrow while Poland gets Armenia. 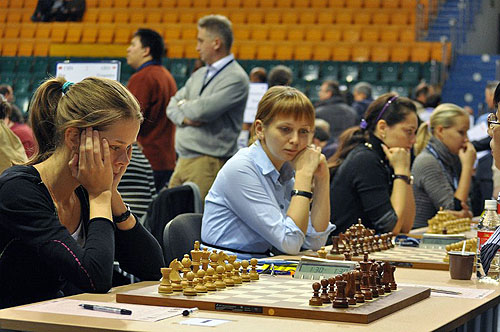 Russia 1 coasted against Hungary. Can they be stopped?
Photo by ugra-chess.com.

Round #7 Analysis: Russia 1 got all they could ask for with a 4-0 mashing of Hungary who had not lost a match previously. The win put Russia 1 in a commanding position on 7/7 and 14 points. Georgia and the surprising India are 2nd-3rd on 6/7 and 12. The surprise with India is that they are playing without their top player, Humpy Koneru. India upset the Ukraine on the strength of Dronavali Harika’s win over Kateryna Lahno. Georgia beat China to send the Lady Dragons into a must-win against Belarus. Georgia will get Serbia.

The USA will play Russia 2 after beating Armenia. Anna Zatonskih won for the margin of victory. If the Americans win they will no doubt get a chance to derail the “Russian Express”. While it’s still too early to make pronouncements, the decision to put Alexandra Kosteniuk seems to be paying dividends. She is on 5½/7 losing on to China’s Zhao Xue. Russia 1 will be heavy favorites against India. 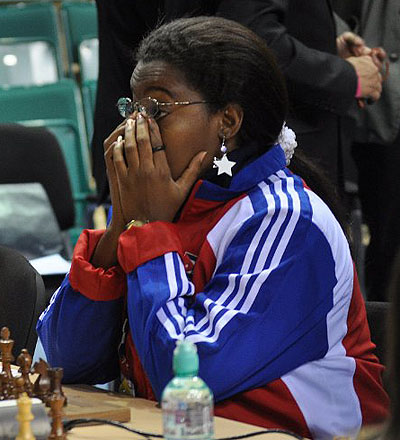