Lekan Adeyemi was sitting in the Dubai International Airport when he received a Skype message from The Chess Drum’s Daaim Shabazz. At the time (21:30hrs in Dubai), the Nigerian team was residing in the airport during a 24-hour layover heading for Khanty-Mansiysk. However, his spirits were upbeat. “No problem. The most important thing is to get there safely and we will be there,” he said optimistically.

He mentioned that there were seven countries in the airport. When asked if there were fierce chess battles being waged, he said “You can bet… blood all over.” 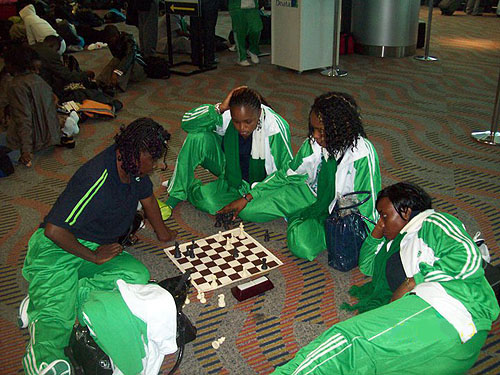 Adeyemi took a nice cache of pictures at the Murtala Mohammed Airport as well as pictures in Dubai. In these pictures were excited team members with a lot of new faces. There are only four veteran players on both the men’s and women’s teams. Bunmi Olape and Charles Campbell are veterans on the men’s while Rachael Dappa-Edwards and Rosemary Amadasun are returning for the ladies. Adeyemi is attending his fourth Olympiad as a Team Captain.

In the photos the players could be seen eating McDonald’s fast food. When asked if there were other options, he stated that Burger King was there but McDonalds is better. Hopefully, the food in Khanty-Mansiysk will be suitable for the 11-round tournament. Adeyemi has hopeful but recounted the difficulties with food at the 1998 Olympiad in Elista, Russia where Olape and Adebayo Adegboyega Joel fell violently ill.

Adeyemi will serve as the team captain, but will also be publicizing the Wole Soyinka International to be held next July. The planning committee has been meeting for what hopes to be a grand event. He will be recruiting Grandmasters to play in this historic event! 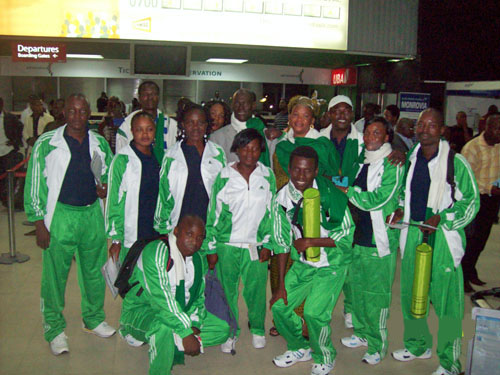