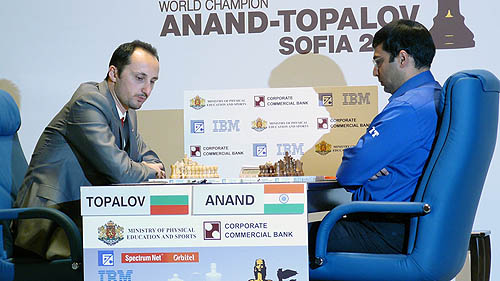 The body language tells all… Topalov will be pressing and Anand will be defending. Game #8 had its twists and turns but certainly not reminiscent of Game #7. Photo © ChessVibes.

If it is not clear that the momentum shifted after Game #7, then it should be absolutely clear that Veselin Topalov has it now. In Game #8, Topalov squeezed an improbable win out of opposite colored bishop ending leveling the match at 4-4.

The momentum has been building for Topalov for the past three games and his ambitions were finally rewarded when Anand blundered with 54…Bc6? This is potentially a damaging loss for Anand who has allowed Topalov to snatch the initiative in the match.

Anand, on the other hand, has played unenterprising chess with black and seemingly was looking to hold with black. None of his black games have shown any imagination as his Slavs have resulted in a huddled mess of pieces that are hard to untangle. In the previous Slavs, he has struggled to find freedom for his pieces, but has been able to equalize. In his Game #8, Anand made some strategic mistakes and Topalov pounced on the opportunitiy to seize the point.

This match has had an ebb and flow with Topalov bursting out the gate with a crushing win in Game #1 and then Anand dominating in Games 2-5. Topalov has controlled affairs in Games 6-8. With four games left, chess fans are wondering if we will see a different opening as all games have started with 1.d4. Anand will have a rest day to rethink his strategy and whether he will stick with his Catalan.