Michele Wilson-Morris of Birmingham believes there is a good reason Charles Smith has been honored by the city Mayor with the “2010 Hidden Heroes Award” from the Division of Youth Services.

His ability to teach the game in such a short period of time and his overall methodology is very unique, but I guess the main thing is that he has put Birmingham on the map as far as chess goes, especially for inner city students, and exposed inner city kids to chess and other opportunities that they would not have were it not for chess. 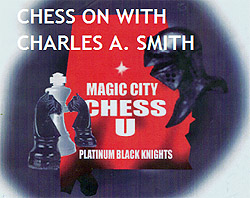 Smith appears to have built a sustainable program in the Birmingham, Alabama area, dubbed, “Magic City Chess U.” Over the past several years, he has worked with inner city youth in Birmingham and as an outreach to schools for implementation in curricula. Magic City U is also working with the Boys & Girls Club and has joined with the NAACP to host a free program called the “Changing Lives One Mind At A Time Initiative”. The program began in October 2009 and runs throughout the school year.

Smith has been teaching chess in Birmingham for the last eight years. His students have won numerous team and individual championships and tournaments at the city, state, regional and national levels. During this stint, he has exposed his students to influential figures such as IM Emory Tate. Tate has visited Smith’s class and the two hope to collaborate in the future. As a player, Smith was the D.C. Amateur Champion and 30 minute Champion in the 1990’s. He continues to spread his knowledge to inspire legions of aspiring chess players.