Bernard Parham has a claim to fame. No it is not as the 1967 Indiana State Champion, or even as a long-time chess educator. He is famous for something else… “The Matrix System of Chess.” This system was created decades ago when Parham had a fascination with the geometric patterns of chess after seeing a connection with vector analysis and physics. He employed a system that appeared so crude that it has brought as many critics as it has advocates. Parham has created a system that apparently defies the accepted principles of chess. He also has set different values for the pieces and even has a separate, albeit more logical, way of recording moves.

What is this Matrix System? It involves positioning the pieces in order to arrive at the earliest possible checkmating positions. One element of this system is dubbed the “Parham Attack.” It entails playing an early Q-KR5 or Q-KB3… or both! Opening moves would be 1.e4 e5 2.Qh5!? Nc6 3.Bc4 or 1.e4 c5 2.Qh5?! He has even employed 1.e4 c6 2.Qh5!? What would appear to be a “Scholar’s Mate” actually has some theoretical underpinnings laid out in Parham’s Matrix System of Chess.

His name surfaced when GM Hikaru Nakamura became the first world-class player (in the modern era) to employ the opening in a classical tournament. Nakamura, the perfect ambassador for this experiment, would employ it several times with mixed results. The opening actually picked up the moniker “H-Bomb” and ignited a fierce debate on the opening and the possibility that old laws of chess can be challenged. 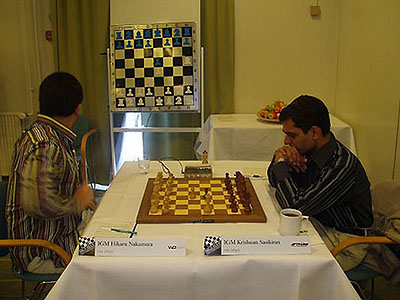 Hikaru Nakamura appears to glance at 2.Qh5!? on the demo board as India’s Krishnan Sasikiran ponders. Nakamura got the idea to play the move from Jason Doss during a chat on the ICC. Doss is one of Parham’s former students, but his urging was initially a light-hearted joke. What was initially a joke turned into reality when Nakamura played 2.Qh5. Photo by Sigeman & Co., 2005.

It was a healthy debate and a successful coup for Parham. That last word is that the opening is risky (at best), but playable. The most challenging line is 1.e4 e5 2.Qh5 Nf6!? 3.Qxe5+ Be7 with good play for Black. Parham has played this opening for 45 years and was pleased to see the ideas tested on the highest level.

With a long-time relationship with Purdue University, Parham has returned to finish his education. He was featured in the student newspaper and has been instrumental in spurring activity at the Purdue Chess Club. He has taught over 6,000 students his chess philosophy. Now at 64, he was quoted in a recent article as being proud of reaching an age that is symbolic of chess. Since 64 represents a perfect number in many ways, the Matrix appears to be real!