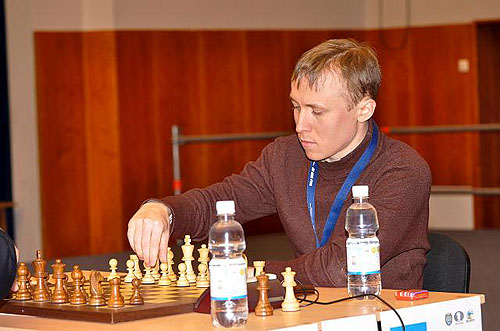 Only four players remaining. The top-seed is still playing, two Ukrainians stars and one unsung Russian will fight for the crown. Boris Gelfand has played solidly and has lost only one game thus far (Polgar). Ruslan Ponomariov and Sergey Karjakin are trying to advance for another all-Ukrainian battle. In 2002, Ponomariov beat Vassily Ivanchuk to with the FIDE World Championship.

Karjakin may finally get his chance to gain the spotlight. Vladimir Malakhov has overachieved, but it would be wrong to call his performance “lucky”. He is a strong player, solid and incredibly difficult to beat. Malakhov has not lost a single game in the tournament and he has also shown his strength in the rapids with 8.5/9!

Should be a great showdown! Only two tables will remain from the 64 that were arranged at the outset.