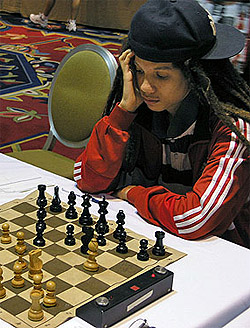 New York’s Kassa Korley has graced these pages several times, but he is perhaps known best for breaking the age record for a player of African desent to earn the National Master’s title. There are a lot of age records falling these days, but Kassa has moved on to vying for FIDE titles. Over the “Thanksgiving” weekend, he competed in the 2009 Philly Congress and put in a solid performance with 4/6. The tri-national (U.S., Denmark, Ghana) has his rating back over 2300.

In an interview with Chess Life, he made notable mention of his game with IM Bryan Smith… it was a game he lost! That’s humility. However, he was intrigued to be a part of a game where a brilliant idea was played. Korley scored a stunning victory over FM Oleg Zaikov (2388) and ended the tournament on a high note beating FM Rodion Rubenchik (2376). Smith took joint 1st with GM Alexander Stripunsky, GM-elect Alexander Lenderman and IM Irina Krush with 5/6. Here is a video with Kassa.

The Scoop with Kassa Korley