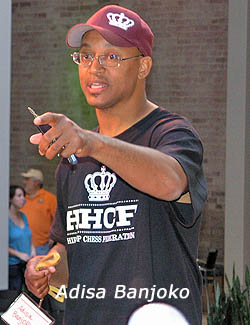 Hip- Hop Chess Federation’s Adisa Banjoko was featured on Bay area CBS affiliate speaking about his involvement with John O’Connell High School. Joe Vazquez reports. Banjoko has been organizing events around the themes of “life strategies” which encourages the youth to think about the decisions they are making in life. Chess is the dominant metaphor in the Hip-Hop Chess Federation’s initiatives, but martial arts and hip-hop culture are also a part. O’Connell’s Freddy Sanchez seems like a perfect subject. The organization has been covered extensively here at The Chess Drum.

One Response to “Hip-Hop Chess on point!”