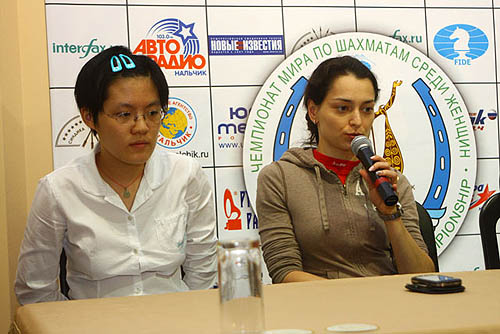 China’s Hou Yifan and Russia’s Alexandra Kosteniuk
will face off in the Championship Finals. Photo by FIDE.com.

For the past two weeks, the Women’s World Chess Championship has seen inspired play amongst the 64 participants. Now that field has been whittled down to two after Hou Yifan’s dramatic tiebreak win over top-seed Koneru Humpy. Alexandra Kosteniuk will face Hou in the final after vanquishing veteran Pia Cramling.

This matchup is interesting for a number of reasons… (1) old power (Russia) vs. new power (China); (2) prodigy of past (Kosteniuk) vs. prodigy of present (Hou); glamour model vs. shy teen. The contrasts make it an anticipated match and there is certainly a lot at stake. Russia has long lost its dominance and China is trying to win their 4th title in recent times… Xie Jun, Zhu Chen, Xu Yuhua have won previously. Zhu beat Kosteniuk back in 2001 for the title.

Kosteniuk is now a 24-year old doting mother and would like to bring the title back to Russia. However, she will be facing a formidable opponent who is energetic and very mature for her age. If Kosteniuk fails to win this time, there is no telling when she will be able to make another credible run given motherhood and the rising tide of younger female players… especially from the east.