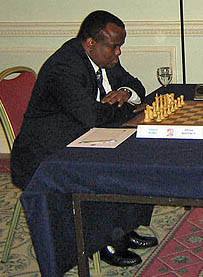 Jamaica’s first Super National Master (SNM) Duane Rowe won the second staging of the Independence Chess Open, which was held at the Rooms on the Beach Hotel in Ocho Rios from August 2 – 3. Rowe took the main event after scoring 5 points from 6 games, while second place also with 5 points, went to FIDE Master Warren Elliott, who was relegated to second place on tiebreak. Third place went to defending champion and current National Champion National Master Equitable Brown who ended on 4.5 points.

The Amateur section was won by newcomer David Bailey who gained 5 points from 6 games, losing only to Tewana Mellace in the 5th round. Adrian Allen also finished on 5 points but had to settle for second after the tiebreak system was employed. Mellace took third place after securing 4.5 points.