Jamaican Chess Federation Vice President Peter Myers reports on summer activities in Jamaica including the 2008 Wheeler Open, 2008 Western Open and the Olympiad qualifier. The latter two are still in progress with Sahir Abbas (3/3) and Shane Matthews (4/5) leading respectively. Below is his report on the Wheeler tournament. 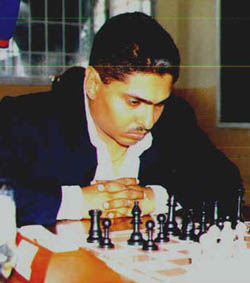 Matthews secured the Open title after scoring a perfect six points from as many games. Second place went to rising junior star Stuart James of Wolmer’s Boys, who ended on 4.5 points while third was shared by four players, Sahir Abbas, Daren Wisdom, National Master Geoffrey Byfield and Peter Myers, each of whom secured four points.

The Amateur section for players with a Jamaica Chess Federation (JCF) rating below 1600, was won by Montego Bay Community College student Oneil Hall, who scored an unbeaten five and half points from six games. Second place was shared by Wolmer’s Boys’ Chad Lawrence and Campion College’s Jevonne MacIntosh who each ended on 5 points.

This, the sixth staging of the tournament, was sponsored by Axis Jamaica Limited and the JCF. The tournament is held each year in honour of National Master Robert Wheeler, for his outstanding contribution to the sport of chess in Jamaica on and off the chess board. Wheeler acted as Arbiter for the 2-day event.