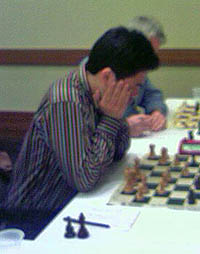 The Chess Drum got an interview with GM Hikaru Nakamura at the Chicago Open in which he revealed (among other things) that he will be moving to Vancouver, Canada. This is a change of scenery for the 20-year old star and he hopes the move will do him well.

After the interview, we discussed even further a range of topics including the Olympiad, U.S. Chess and why he missed the recent U.S. Championship. Nakamura writes on these issues on his blog. He also told me about his afternoon in Washington Square park where he was giving ridiculous time odds of 5minutes:45seconds for$100.00 a game! For those of you who cannot believe this… it CAN be done! 🙂 One of his main opponents in this match was the infamous Yaacov Norowitz. If this wasn’t unbelievable enough, he mentioned that another person offered to take odds of 3minutes:30seconds for $10,000. 😯

Nakamura tied for 1st at the Chicago Open barely missing the tiebreak match and a chance to show off his world class blitz skills. Nevertheless, he had been away from the tournament scene for a month and claimed to be rusty. He gave a summary of his games including a loss to GM-elect Josh Friedel and details of his other games.

Listen to interview with Hikaru Nakamura!