Olympiad tournaments are quite interesting. Of course traveling to foreign countries can be fulfilling, but the Olympiad tournament has a mystique like no other tournament. Being able to see flags hoisted during the opening ceremonies is an interesting spectacle along with the renewing of friendships and the development of others.

I have found Olympiad tournament to be inspiring. It allows one to see that chess can bring together diverse people who all speak one language. I wrote in the foreword to Ian’s Wilkinson book on the 2002 Bled Olympiad which was titled, “Magnificence in Bled: The 35th Olympiad in Bled.”

What is so special about the Olympiad tournament and how does it differ from other major chess events? Is it the staccato of different languages being spoken? Is it the unique non-verbal expressions of communication? Is it the patriotic, colorful garments worn by the players? Is it the flags festooned throughout the tournament hall? Perhaps it is a combination of them all. Who can forget Zambian women’s player Linda Nangwale? Her hair featured the colors of the Zambian flag and received praise from many famous players. These memories leave a lasting impression and unlike other international tournaments, nations barely appearing on the chess landscape are able to experience this spectacle and add their own flavor to the venue. 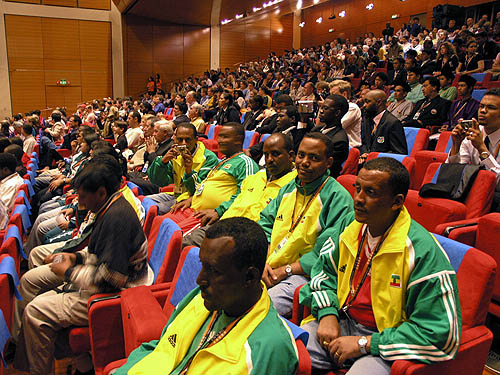 The Olympiad is a special tournament and most of the stars are able to show their national pride as opposed to their own individual status in a given tournament. It is also very interesting to see players close up and to converse with them in a relaxed environment where the elite players are conjoined with the rank and file. There is a certain spirit present in the hall and there are always stories one can take home. If you have not been to an Olympiad tournament, then put this on the list of things to do!