Ever since Garry Kasparov retired (and even prior to), there has been a slow changing of the guard in chess. The powerful Soviet School of Chess still reigned after the fall of the Soviet Union. However, the advent of computers, the migration of Russian players and simply the passage of time has ushered in a new era of players upsetting the balance of power in chess.

Looking at the recent troubles in team competitions from Russia and the current disappointment of Russian players in the current World Chess Championship, it is safe to say that Russian dominance of chess is over. The rise of China and India along with the rise of young chess talent from around the world, Russian can no longer command the type of awe as in previous years. 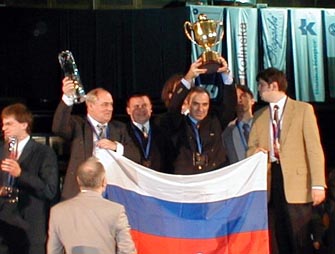 Garry Kasparov triumphantly hoisting the Winner’s Cup
at the 2002 Chess Olympiad as the Russian squad looks on.

Chinese women have dominated women’s chess for nearly two decades and its men won the Olympiad silver medal last year. The men have traveled the world in recent years conquering other federations in team matches and now boast five players in the top 100. Viswanathan Anand is the heir apparent to Kasparov as the most dominant player in the world. India is creating a ground swell of support as in 10-15 years will be a top five chess power.

While Russia will remain a chess power and will continue to produce a cadre of strong players, its support for chess has weakened tremendously. Even Kasparov recently stated serious concern about the future of Russian chess and the lack of consistent support.

The world has finally caught up.