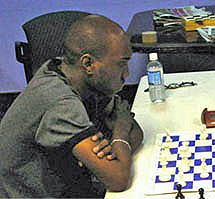 The 2007 edition of the Jamaican Championship has come down to the last three rounds. FM Warren Elliott leads the pack with +5 on 6½-1½. The four-time Jamaican champion was upset in the 8th round by Mikhail Solomon while Equitable Brown has won six consecutive games to pull to within ½-point on 6-2. Seven-time Jamaican champ Shane Matthews has battled back after two upset losses in the first two rounds and is 1½-points off the pace.
Drum Coverage here!