Vadim Milov (Switzerland) and young British star David Howell have taken off with 2½ points in the first three rounds in the 7-day schedule. Sandipan Chanda (India), Borki Prekojevic (Bosnia) and Daniel Fridman (Latvia) are joint 2nd on 2 points. In the 5-day schedule, four Grandmasters, two IMs and one WGM have won his first two games and sits atop the Open section with six others on 2/2. U.S. Champion Alexander Shabalov has struggled out of the gate after being held by a couple of “regular” masters (2411 and 2335 USCF) . The 4-day schedule starts on today and the “wild and fast” 3-day schedule starts tomorrow. That later will entail players playing five rounds in one day!

I saw Hikaru Nakamura and his stepfather Sunil Weeramantry walking around, but it appears as if they are going to play in the faster schedules. After my game last night, I saw Maurice Ashley and had a brief chat with him. As far as I know, he is not playing, but is perhaps conducting some business matters. He told me life is good, family is good and the projects he has in progress are coming along. Perhaps we will have an exclusive audio interview with Ashley to get more details.

On a personal note, I took a bye in the first round to take pictures and had a strange experience with a tournament director. I had finished taking pictures after the allowable 10 minutes had expired. I was viewing my pictures with my back turned to the players when a tournament director said that no electronic devices were allowed. I told him this is a camera and I was not taking pictures. He said it doesn’t matter. Of course, I protested.

Looking around the room several players had headsets apparently playing music and of course there was monroi with computers running game feeds. I went to Walter Brown who stated that the rule wasn’t intended for cameras and he confronted the accusing TD who insisted that cameras could somehow be used for cheating. Certainly I could take a picture, go up to the room, punch the position in a computer and confer with a friend, but this was a ridiculous notion. With all the cheating going on in past World Open, this TD (named “Greg”) is sent around making sure players do not bend the rules. Well this Greg guy talked to Bill Goichberg who informed him who I was and that as long as I don’t use the flash after 10 minutes that I was fine. Digital cameras??? Sheesh!

On a personal note, I played my second round game against a Andrew Svehaug, a name I had to check and re-check in order to spell correctly. We played an interesting game as I trotted out the Benko Gambit. I was able to tactically win a pawn in the middle game and moves later the ensuing position occurred after 23…Nd5-f6 24.a2-a3. 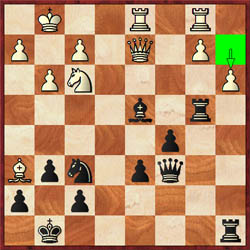 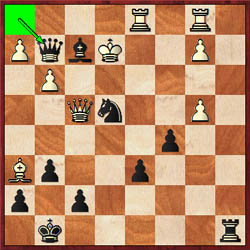 I hope to have more games (not mine :-)) as the tournament wears on. Also look for full-blown reports on the main site. Check out monroi.com for games and other reports. The worldopen.com site does not seems to be updated.