Ever so often the chess community is blessed with a special personality. Sometimes that person is heralded as the next great player, but how often do we here about the people that are responsible for helping those players become great? A native of Sri Lanka, FM Sunil Weeramantry has been making impressions on young players for decades and has co-authored (with Ed Eusebi) an ever-popular book titled, “Best Lessons of a Coach.” 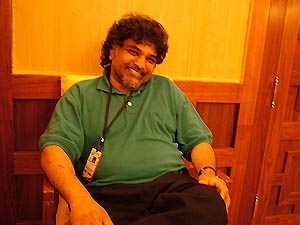 In the United States, when the words “chess coach” are mentioned, Weeramantry’s name almost invariably comes up. This man of humble abode has become even more notable because he is the stepfather of one of the world’s brightest chess stars in GM Hikaru Nakamura.

At the recently-concluded World Open in Philadelphia, I asked Weeramantry for a chat on his experiences in Libya and he kindly obliged. His comments were witty, insightful and engaging. What was to be a chat turned into an hour-long conversation about chess, life battles and his passion for chess. Enjoy!

When Preparation is Half the Battle

Like most people directly involved with the 2004 FIDE World Championship, Weeramantry had to make many preparations for the pending trip to Tripoli, Libya. When I asked Weeramantry about his concerns, they were not about security issues or perceived threats in Libya, but had more to do with simply getting visas for Hikaru and himself. Thus, he did not board the plane until he was confident that the visas would be issued upon arrival.

Of course, there were many controversies swirling in the chess media about the tournament, but like the British-trained lawyer that he is, Weeramantry prepared a file including every single piece of data needed to ensure that Hikaru’s big moment would not be in jeopardy. In this two-inch thick stack of documents, had every letter from FIDE and the USCF, tax records, personal data and because his name is different from his stepson’s, he brought a letter from his wife stating that she gave him permission to travel with Hikaru! 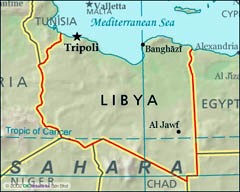 This was Weeramantry’s first trip to Africa apart from a brief stopover in Egypt. His first impressions of Libya were no panhandling (as is common in developing countries), its cleanliness and the fact that many houses were painted green! This is a very favorable color in Muslim countries. The solid green Libyan flag also carries this patriotic symbolism.

During the trip, neither he nor Hikaru ventured far from the hotel. In terms of the cuisine, Weeramantry talked with some excitement about a nice Turkish restaurant near the hotel and their “Turkish pizza.” As far as Libyan local cuisine, only the common Middle Eastern fare (Tabouleh, Hummous, Baba Ghanouj) was tried. The reason… a family trip to Sri Lanka two years ago. “The first 1½ days were OK, but then after that, everybody got sick. The trip was a disaster.” This time both of them would play it safe.

The chess tournament would take place at the Al-Mahary Hotel, one of Tripoli’s five-star hotels. Weeramantry commented that there was some sort of conference in session that included African Heads-of-State. In a word, he described the conditions as “superb.” The spacious playing rooms, the DGT boards and the attractive name cards added to the festivity. There was a well-equipped press room for the players and the press and a business center for personal services. Since he did not speak Arabic, Weeramantry had to speak French with Abdul, a business custodian. Abdul helped him make his three-minute call to New York. 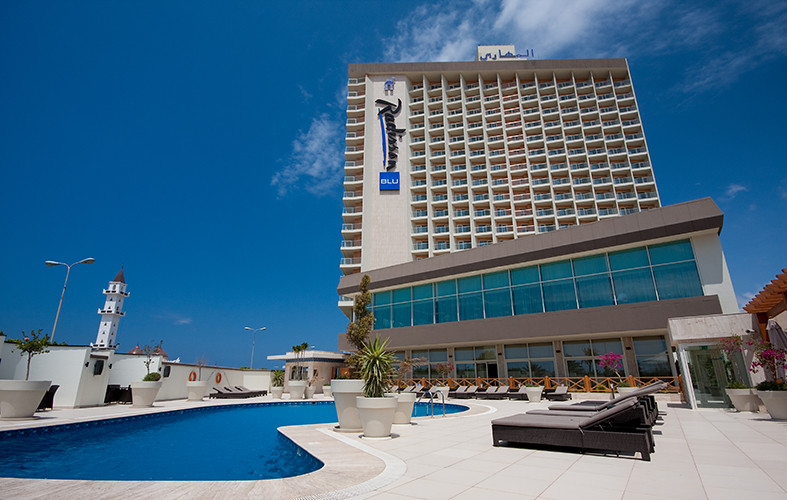 For pre-tournament preparation, Hikaru researched his opponents and was in awe of what he found. For example, Sergei Volkov was 2001 Russian Champion; Aleksey Aleksandrov had a meteoric rating of 2668 (has beaten Judit Polgar, Alexander Morozevich and other top players); Alexander Lastin was the 2002 Russian Champion. It must have been quite an overwhelming experience to play such esteemed players. Weeramantry encouraged Hikaru to let his playing speak for itself.

When I asked Weeramantry if he had met any interesting players, he mentioned that he knew most of the people there stemming back to 1972 when he represented Sri Lanka on the Olympiad team. In fact, the former New York State Champion is still listed as a top player for Sri Lanka. He mentioned that he and Hikaru had spent some time with Zambian star, Amon Simutowe. Weeramantry also recognized Kenny Solomon whom he met in the Bled Olympiad.

For the first time, a World Chess Championship was held on the African continent. Kirsan Ilyumzhinov seemed particularly proud of that fact and stated, “We have tried to have the Championship in every continent.” Despite the controversy surrounding the tournament, players were impressed at the level of organization and the first-rate conditions at the playing site. Nizar Elhaj, FIDE’s Regional President for Africa was instrumental in the success of this tournament. Ali Nihat Yazici conducted interesting interviews and the web coverage was revolutionary.

After the ceremonial move on the Adams-Asabri board, the games began! The time control was a brisk 40/90 + 25m + 10s which Weeramantry said would favor the younger players such as Hikaru, an adept blitz player. Hikaru ran into difficulties with Volkov’s French and was on the verge of falling behind before he found a drawing sequence with 33.Nxf4!? It was a close call. He won both tiebreak games and moved on to face Aleksey Aleksandrov of Belarus.

Meanwhile, fans at the Internet Chess Club were beginning to talk about Hikaru. Weeramantry discussed with me that problems Hikaru has had in the past still haunt him. Thus, some of the ICC talk was not flattering, but few people were rooting against him. In fact, Hikaru picked up loads of fans with his fighting style. One of the observers of the Nakamura-Aleksandrov match was Mikhail Gurevich, a respected Grandmaster who was impressed by Hikaru’s study-like move 97.Nh1! in game #1.

After Hikaru polished Aleksandrov off in the 102-move brawl, people began to feel that something special was happening. Both Volkov and Aleksandrov were tough opponents, but they both fell unceremoniously. Next Hikaru faced Lastin. When I asked about Hikaru’s best game, Weearmantry thought for a second and said, “Probably the game with Aleksandrov, but most liked the 1st game with Lastin.”

Nakamura-Lastin was certainly a gem and one that was the subject of Lubomir Kavalek’s column in the June 28th Washington Post. He stated that the game was on the cutting edge… “sound,” “inventive” and “solid.” One look at the game and one would be inclined to agree (see game). The match victory over Lastin appeared to show a sign of good things to come.

On to the “Sweet Sixteen”

Now chess fans around the world were buzzing about Hikaru’s march to the “Sweet Sixteen.” After conducting an audio analysis of Nakamura-Lastin (game #1) on Chess.FM, John Fedorowicz stated that “Hikaru has finally met his match.” Nevertheless, this would be one of the biggest tests for the young phenom. In a separate phone conversation, I talked to Amon Simutowe who shared with me his Libyan experiences. He mentioned that he spent time with Hikaru and commented on how much he was inspired by his play and work ethic. Other inspired players on the ICC came up with the name, “King Naka.”

One of the points that Weeramantry made is that Hikaru’s strong play (as it is with Teimour Radjabov and other young players) is noticeable because young players take more chances. “As players get stronger, they get more conservative because they have reputations to protect,” stated Weeramantry. Having said that, Garry Kasparov remarked that Radjabov’s reputation had been blemished because of his match strategy to settle matters in fast time controls. Certainly, Michael Adams has quite a reputation, but he must have known that this match with Hikaru Nakamura would be a tough one indeed. 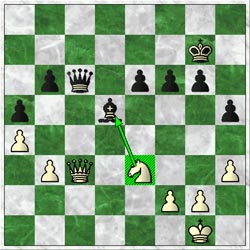 After Adams played 33…Qc6? there was a question whether the relayed move was correct because 34.Nxd5! appears to draw… 34.Qd3? was played instead.
Over 1100 visitors on the ICC were following the Adams-Nakamura (game #1). In a pitched battle, the two gladiators fought valiantly and reached a critical moment. With 30 seconds left on his clock, Adams played 33…Qc6? Weeramantry said that Hikaru (with four minutes) had already fixed in his mind that he wasn’t going to trade queens and did not seriously consider 34.Nxd5! which would immediately draw the game. Nevertheless, 34.Qd3 was played and Hikaru went on to lose the game.

After the game both players joked about missing 34.Nxd5! When asked about Hikaru’s Alekhine experiment in game #2, Weeramantry simply stated that Hikaru wanted to try something different to rattle his esteemed opponent. Unfortunately, Adams would not allow complications and game #2 was drawn without much drama. Hikaru’s run had ended. The ICC crowd gave “King Naka” a round of applause.

Weeramantry said that they were very grateful for the opportunity to participate in the FIDE World Championships and of course his stepson will now enter a new phase in his career. He will now be known as “a Championship Contender” which carries some responsibility and prestige. Part of the challenge of being an elite player is to develop social graces. This could be a challenge for a 16-year old in a circuit dominated by adult men who often have a different perspectives and different lifestyles. In speaking to Hikaru briefly at the Chicago Open, he appears to acknowledge this responsibility and appears to have mellowed from the precocious young boy many seem to remember (and can’t forget).

Ironically, Hikaru has received more acceptance among foreign chess masters than he has on the American circuit. Perhaps many of the players in the U.S. realize that their days of tournament strategizing with chess friends are over. Hikaru Nakamura is certainly a player to be reckoned with. He prefers to work alone and he is not one to cut deals. The comparisons with Bobby Fischer are perhaps premature, but hard to ignore. This way he can think independently and enjoy the success he deserves. Weeramantry has done a great job in helping prepare Hikaru for this success and it makes perfect sense that a legendary chess coach would help to produce such a special chess player.

However, more controversy abound… it is not certain that Hikaru will make the U.S. Olympiad team that will travel to Mallorca, Spain this year. How is it possible that the brightest star to hit the American galaxy in three decades will not able to get a spot on a Olympiad team? Weeramantry has already discussed the matter with Hikaru (who ranks 7th in the country’s FIDE rating list). In 2002, many top U.S. players analyzed the Olympiad failures in Istanbul (2000) and Bled (2002) and stated that “new blood” and “hunger” was needed to improve the dismal results of the past two Olympiads. If Hikaru’s sterling performance in the 2004 FIDE World Championship is anything to go by, perhaps they’ve found the man they’ve been looking for. 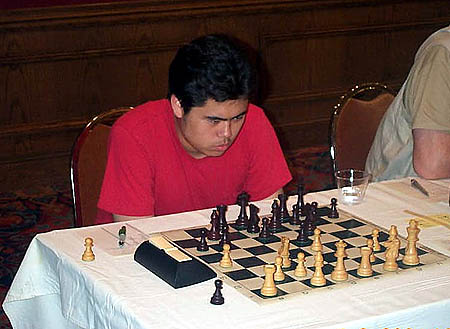