Tania Hernández Álvarez was a prominent player in the Cuba’s women’s circuit haven competed in the national championship several times. However, she joined a large migrant population of chess players and she settled abroad in Costa Rica and renewed passion for chess. A few years ago, she obtained Costa Rican citizenship and now competes for the country in international tournaments.

Hernandez is from Central Havana and started her chess journey in the walking grounds of Cuban legend Raul Capablanca. She participated in many Cuban championships and represented her country in four Olympiad tournaments (1984, 1994, 1996, 1998). Apparently, things were very challenging economically and in 2010, she charted a new course in life and settled in Costa Rica.

According to an interview conducted two years ago, she felt her love for chess rejuvenate and she became a national teacher in her adopted country.

At what age did you start playing chess?

What caught your attention? 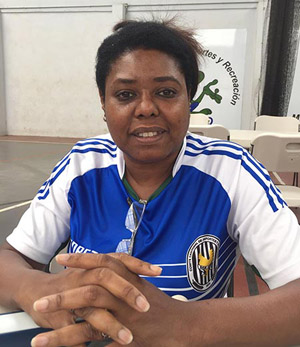 As soon as I saw a chess game with my uncle-in-law (aunt’s husband), it struck me that it looked like a maze because I like everything that has to do with thinking, with the mystery, that there is beyond, and it caught my attention. Therefore, the other day I was already in a chess academy in Cuba, which had many very good ones. I did visit the next day after learning the game, which is normally learned very easily… in a few hours or a day.

Who prompted you to practice this discipline?

My uncle-in-law, my mother, the family taught me to practice discipline and my thing with chess was love at first sight.

What do you remember from that first game?

The truth is that I do not remember, but obviously it must have been in my favor because I stayed all the time in chess and it was a vice, an addiction that I had. I grew up very fast in chess, I studied many hours a day and was already beating the big boys. That first year I did very well.

How much do you dedicate to this sport?

I try to dedicate at least four hours to it, I can’t always do it for work.

How many sacrifices has it taken you to prepare well and become a national champion and climb to the FIDE level?

The sacrifices to prepare and be the Costa Rican champion have been immense, because I have had to change my whole mentality, to begin with. I am a diabetic, hence I had to change my diet, begin to prepare myself physically to endure so many hours in chess. I am 55 years old, which is a disadvantage compared to other girls, but I think that everything is in the mind, what you want, what you want. If you have the mental strength you can do it all.

It is my life, it is clear to me that it is an indissoluble marriage with which I will never separate, I am super in love, I have had several stages, even divorce too. When I arrived in Costa Rica I was totally discouraged, but Costa Rica healed me, made me fall in love with chess again, and rescue that marriage and that is worth gold.

What do you project in chess?

What I am projecting right now is to stay at the high level, because honestly, it is not only with being a chess coach, I had to get involved after having left being a player, because it helps me pay my expenses, and my passion for playing games, playing chess tournaments when I saw that I couldn’t pay taxes just by being a chess coach. And I want immensely since I became a Costa Rican citizen, thank God last year, to attend the next chess Olympiad playing for Costa Rica, I want to give that to this country, it deserves it for how well they have treated me, it is my project gold and if God allows me to bring me a medal, I will do everything possible to train myself to fulfill this project. I don’t think there are two athletes in the world who participate in two countries and have good results.

What is the adrenaline rush of being in a game?

The adrenaline that is experienced in chess games is immense, your heart from the moment you sit down beats very strong, you already know that you are going to have a battle with someone and that you have to get into their mind and try not to get into yours, therefore, that generates all kinds of things. In my case it fascinates me, I don’t know what to compare what one feels in those 3, 4, or 5 hours of play; And that is what sustains me and keeps me going in chess. If I lose that love, that desire, I will leave this sport, which has already happened to me in Cuba.

How much does a game wear?

It wears out a lot, especially at my age, you have to eat very well, think very well, have a lot of mental strength, it is very tiring. And as the game progresses a lot in my case, I have less chance of winning it because of my age, therefore, I am doing an extra job.

What does chess represent for Tania?

It is my life, it is clear to me that it is an indissoluble marriage with which I will never separate, I am super in love, I have had several stages, even divorce too. When I arrived in Costa Rica I was totally discouraged, but Costa Rica healed me, made me fall in love with chess again, and rescue that marriage and that is worth gold. So thank you very much Costa Rica, God bless you.

Interview in Managua, Nicaragua at 2014 Subzonal 2.3
where she was coaching Costa Rica