Match still drawn after 11 games…
Will tomorrow bring us a fierce battle or peaceful draw?? 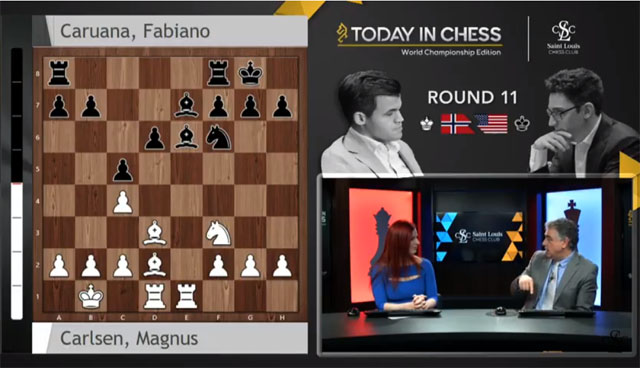 Today was a slow day and had the fans and commentators groaning. About the most exciting thing happened before the 11th Carlsen-Caruana game started. Sergey Karjakin, the championship challenger from 2016 made the first move today. A bit of levity helped ease the tremendous tension in the hall.

What was funny was not the 1.b4 move, but that Karjakin had stated in an interview that he wished that Caruana would win the match. So 1.b4 would certainly increase the American’s chances!

The game today was a double king pawn opening featuring the Petroff variation and Carlsen played one of the most aggressive lines after 5.Nc3 Nxc3 6.dxc3 Be7 7.Be3 O-O 8.Qd2 Nd7 9.O-O-O. Opposite side castling always makes for an exciting battle, but this game only had one moment of tension and that was Carlsen’s 15.Nh4!?

Caruana stated that he was surprised at the choice. The commentary team at the St. Louis Chess Club gave 15…Ng4 16.Ng6! fxg6 17.Rxe6 Nxf2 18.Rde1 Nxd3+ 19.cxd3 Bf6 20.Rxe6 with unclear play. Actually white end up winning a pawn in yet another bishop ending, but the game was completely equal. Press Officer Grandmaster Daniel King gives his onsite assessment.

“With the sample size of Carlsen’s Sicilian responses we have seen in this match, Caruana should be comfortable playing for a win in game 12. This is why I think it may be a risky idea for Carlsen to repeat the Sicilian in game 12 – but he is still Carlsen. Ultimately, Caruana’s decision whether to press for a win in game 12 may depend on whether he believes Carlsen is much better in tiebreaks and if the psychology of his mind set has already shifted to tiebreaks. In any event, at this stage of the match, I believe the majority of chess fans would prefer the result to be settled in tiebreaks.” 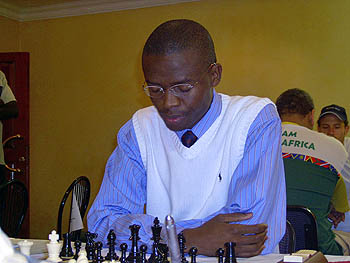 So what’s in store for tomorrow? The champion gave his impressions…

Magnus Carlsen on game twelve: "A lot depends on what he wants to do. If he wants to shut it down, that's fine by me, we'll play rapid. Otherwise, we'll have a fight." pic.twitter.com/5qJzwJr4kz

Ashley on Trevor Noah on Chess