A bit of melo-drama in Carlsen-Nakamura,
but Aronian holds lead. Draw needed to clinch.

The pretext of this round was set. There was one leader and four players giving chase one point behind. They needed a win to close the gap. Perhaps not much would be expected from Levon Aronian today, but some exciting games were expected.

However, it was relatively quiet today as all the games were drawn in the penultimate round of the Sinquefield Cup. While both Grischuk-MVL and Aronian-Anand ended in similar three-fold repetition, So-Topalov and Giri-Caruana had a bit more fight. In fact, Caruana was nursing a pawn advantage, but the ensuing rook and pawn ending would simply drawn.

The game of the round was clearly Carlsen-Nakamura, the budding rivalry which was accented by a bit of trash-talking before the tournament. When asked about Nakamura, Carlsen said, “He’s not second best… or third best.” When asked where the American stood he said, “Somewhere after that.”

With this bit of trash talk, Nakamura had to try a break the eleven-game losing streak. However, he did not pick the right opening to do so. Even former world champion Garry Kasparov discussed this on the show. While Kasparov was giving praise to Nakamura for his sparkling win over Wesley So, he was not impressed by his choice of facing the Queen’s Gambit against Carlsen.

Kasparov on Hikaru's position: "At least in the King's Indian you go down kicking and screaming – here it's just screaming!" #SinquefieldCup

Indeed, Nakamura got into an comfortable position and excoriated his first 15 moves. According to chess.com, he opined, “For the millionth time I played a terrible opening against Magnus. I felt I could have almost resigned. I played well when I had to but it still doesn’t really excuse the way I played the first 15 moves. For the most part I’ve played bad chess here. I can’t seem to remember anything I’ve prepared.”

This was revealed as Carlsen was on top after Nakamura’s 16…Nxd4? 17.exd4 b6 18.Kd2! After some very interesting play on the queenside, Carlsen had arrived at a completely winning position. Instead of keeping both rooks on the boards, he allowed Nakamura to get a pair off after 39.Be3? (39.g3 is good enough) Rb8! With a rook versus two bishops, it is usually stronger for the second player. In a crucial moment Nakamura played a very ingenious double pawn sacrifice to further simplify.

After 48…Re1!? 49.Be3 f4! 50.Bxf4 a2 51.Bxa2 Re2+ 52.Kb3 Rxf2, black could set up a nice blockade alternately harassing the king, one of the bishops or the g3-pawn. Carlsen could not make headway, but there was and mini-controversy. Nakamura claimed a three-fold repetition. However… 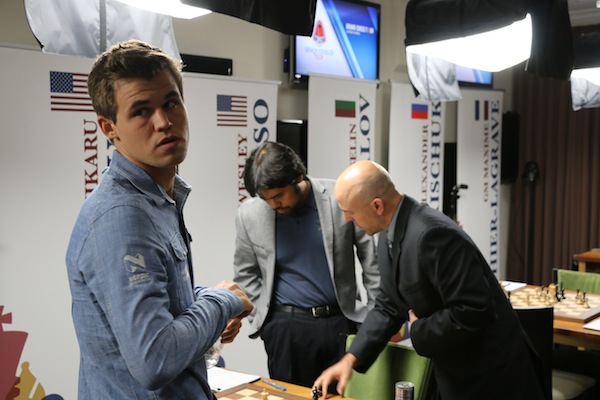 The draw was said to be a moral victory considering Nakamura’s score against Carlsen and his position in the game. Nakamura stated that this draw made up for the loss in Zurich where he had an overwhelming attack, but bungled it. According to chess.com, Nakamura looked at it as practice for the Candidates. On the other hand, Carlsen was frustrated with his uneven play and has resigned himself to fighting for second place.

Aronian has put himself in a good position to capture the second leg of the Grand Chess Tour. He will face Veselin Topalov who has fallen off the pace in the second half and probably will not have the energy to fight for a win. Four players are a point behind and will be fighting for position and tour points.