Back in early December of last year, GM Maurice Ashley announced an epic event… a “Millionaire Chess” open tournament with an unprecedented prize fund of $1,000,000. It has generated a ripple throughout the chess world and ignited a discussion about tournament conditions and the commercialization of chess. Ashley has been grappling with this question for many years… “how does the chess community present chess in a way that is not only enticing to sponsors, but marketable to the general public?”

Some of the early criticism has been on the amount of the entry fee and whether GMs should have to pay it. Other issues stem from which rating will be used (to prevent sandbaggers), the month it is held and whether it is “child-friendly”. There are a myriad of comments, questions and opinions circulating on chess forums, blogs and Facebook. Groups like the New York-based “Chess Connections” have been in a frenzy about the tournament and active in organizing teams.

“WOW! I am so excited about this new tournament, the Millionaire Chess Open. There is no doubt that this will change the standards for chess tournaments here in the United States. Grandmaster Maurice Ashley has yet again taken steps to revolutionize the chess world. I cannot wait until October 2014!!!!”

Some of the comments have been rather crude and crass while others have been well-reasoned and insightful. Thus, if Ashley has accomplished one thing, it has been to start the discussion. For so long, chess players have attended the same tournaments year after year without any notable improvements in the themes or incentives. 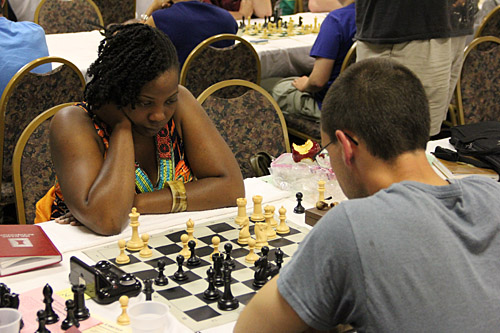 Thus far several GMs have signed up for the event including GMs Gregory Kaidanov, Alexander Shabalov, Alexander Lenderman, Parimarjan Negi (India) and Throstur Thorhallsson (Iceland). One prominent GM has taken issue with the entry fee requirement while others have scoffed at the fact that there are no conditions given to titled players.

Ashley has told The Chess Drum, that it is highly improbable to fund such a tournament with the bottom feeding the top (which would include appearance fees paid out). In this tournament, everyone will pay an entry fee… even the elite players. However, it is to be expected that adjustments will be made and more incentives will come in the build-up to the event.

“Can’t wait for the tournament!!! It’s going to be a historic event! I play 4-5 tournaments a year, but this one will be the most important for me.”

Certainly with World Champion Magnus Carlsen holding a higher profile in chess and hobnobbing with Silicon Valley billionaires such as Mark Zuckerberg of Facebook and Bill Gates of Microsoft fame, it could bode well for chess promotion. Millionaire Chess is trying to get a groundswell of support while procuring sponsors to invest in the future of chess. With the profile of chess growing in the media, such endorsements may be forthcoming.