While the fervor from World Championship has subsided and Magnus Carlsen settles into his role as the World Champion, other action is heating up in Antalya, Turkey. The biennial World Team Championship is being held featuring ten of the top teams including the host nation of Turkey. 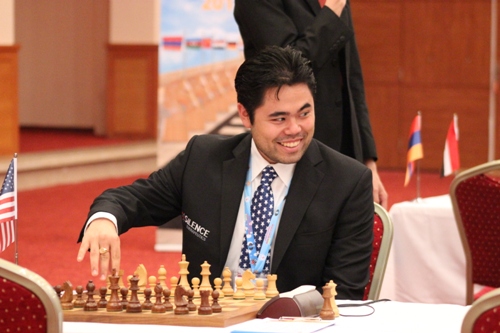 Hikaru Nakamura is climbing up the ELO list and hopes to carry his team to another medal. Photo by Anastasiya Karlovich.

Many top players are defending their honor including Levon Aronian of Armenia, Hikaru Nakamura of the USA, Vladimir Kramnik of Russia, Vassily Ivanchuk of the Ukraine. Anish Giri will lead the Netherlands, Alexander Iptov holds top board for Turkey and Bassem Amin mans the top board for Egypt.

However there are many players absent including Teimour Radjabov, who led Azerbaijan to the European Cup and Wang Hao of China. Egypt, ranked last, are missing Ahmed Adly and Essam El-Gindy. Both the Ukraine and Russia are the only teams with a 2700 ELO average and hope to make a strong showing. Armenia and the USA generally have good chemistry and will contend.

Things heating up at World Team '13!!