INTERNATIONAL Master Gillian Bwalya was on Sunday crowned winner of the second edition of the Airtel Chess Challenge. Bwalya, who amassed 4.5 points in a four-way tie in first position, was higher on tie-break.

In second place was Kelvin Chumfwa also with 4.5 points with 21.5 tie-break while Andew Kayonde of Green Eagles in third also recorded the same tie-break. Midosantos Chola recorded the least tie-break and therefore was four in the elite section of the two-day tournament.

And the Open Section had a two-way tie for 1st position at 4.5 out of 6 points. Aaron Banda, who is also Chess Federation of Zambia national tournaments director, was crowned champion after having the better tie-break. Banda and Joster Kandangwe both collected 5.5 points while the third,fourth and fifth position was a three-way tie at 5 points.

Kondwani Gondwe, Douglas Mwale and Bright Muyenga were crowned third, fourth and fifth. Arnold Shamwaka of Kabulonga Boys Secondary School emerged the best U-18 player in the event. Lusaka Province Chess Association also used the elite section of the tournament as a mode of selecting 10 representatives from the province to compete in the national trials. 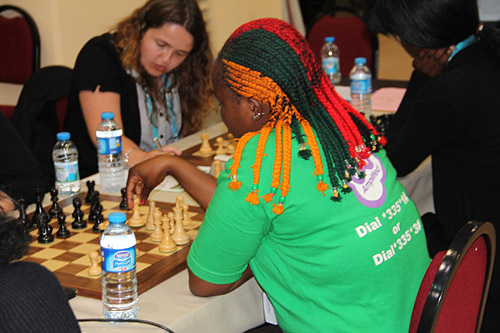 The tournament was divided into three categories: Elite, Open and Kids Sections. The Airtel Chess Challenge attracted 140 players, 54 of them being juniors under the age of 15. Constance Mbatha was crowned best female player for the event after displacing Linda Hamoonga due to her better tie-break.