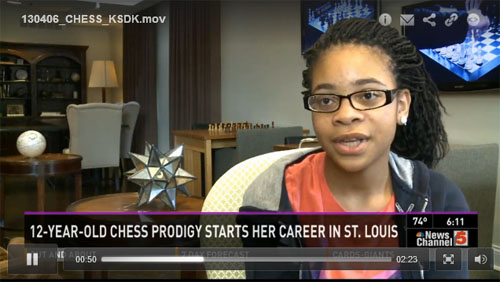 Diamond is growing and shining!

Diamond Shakoor has been on a path. A path that would take her through three Midwestern states: Michigan, Ohio and Missouri. The most recent move to St. Louis was an effort by her father Abdul Shakoor to put her in an environment where she could maximize her ability. Diamond has been able to amass a sizable trophy cache in her modest home and her father puts constant reminders around to inspire her efforts.

St. Louis has become the chess capitol of America and it is home to the World Chess Hall of Fame and the opulent Chess Club and Scholastic Center of St. Louis. The city has attracted top notch chess programs at Webster and Lindenwood Universities and is home to the U.S. Championship franchise (overall and women). Thus Diamond has an environment that is suited for her development. Several other families have moved to St. Louis for similar reasons.
KSDK-St. Louis interviewed Diamond and father Abdul to get a better idea of her amazing story.

Diamond and her father Abdul are also hosting a tournament in May billed, “1st Annual Diamond Shakoor CHESS FESTIVAL” to be held in Centreville, Illinois. The tournament will double as a fundraiser for Diamond’s chess development, but more importantly will provide an arena for children to compete and have fun! See details below!!