The CARIFTA Chess Games which begins at University of West Indies (UWI) on Friday will make history in several ways, not the least being the honouring of past presidents of the T&T Chess Association, all players winning medals at Olympiads and official FIDE tournaments.

According to Association president Kamla Rampersad De Silva, the inaugural tournament will be a landmark affair, marking the 75th anniversary of the Association.

“It will also be the inaugural tournament of the official FIDE event which will be an annual event alternating among Carifta countries,” she added. “So we are honoured to be the first in hosting it.”

The Association President said she was pleased with the assistance received from sponsors which has enabled the Association to cover almost all its expenses.

Major sponsor is the National Lotteries Control Board which has given a total of $50,000. Caribbean Airlines has donated two tickets to bring chief arbiter Rohan Waithe and chairman of the appeals committee Allan Herbert from Barbados. First Citizens Bank is footing the bill for school backpacks, T-shirts for volunteers and souvenir items. T-shirts for all participants will be courtesy Oscar Francois and Glaxo Smith Kline while Republic Bank and Whan Tong Agencies are providing the anniversary plaques. Kamal Design Studios are supplying medals for tournament winners.

The Association president was also happy over the regional response to the Carifta tournament, revealing that more than 90 entries had been received so far coming from Barbados, Jamaica, Suriname, Martinique and T&T. She expected also that the parallel T&T International Open would attract a substantial turn out of regional senior players. 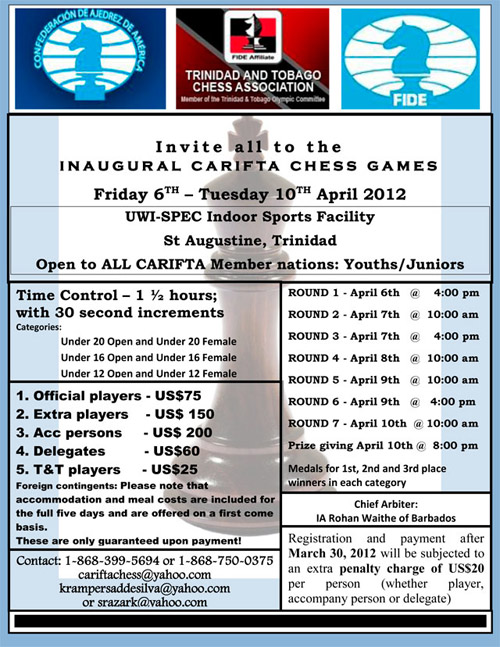