Egypt is famous for a city called the “Valley of the Kings”. In Maputo, Mozambique an Egyptian was not on the king of the tournament, but also reigned as the queen as well. GM Ahmed Adly and WGM Mona Khaled won the 2011 African Individual Championship continuing the dominance of Egypt in continental tournaments.

There were three spots at stake for qualification in the World Championship cycle. Previous slots had been secured by IM Robert Gwaze of Zimbabwe, Hatim Ibrahim of Egypt and IM Mejdi Kaabi of Tunisia. Thus the stakes were high and players from ten countries would trek to Maputo to play for the honor of their country. The open section had 29 players and the women’s section had 16.

Defending champion Bassem Amin fell off the pace drawing with Zambia’s Stanley Chumfwa and losing to Adly. He followed that with another draw and then a loss to FM Daniel Jere. Amin was unable to recover while Adly continued to pile up wins. Amin make a comeback but it was not enough and he did not qualify. Egyptian Grandmaster Essam El-Gindy started quickly with 5/6, but the talk of the tournament was South African FIDE Master Henry Steel. The South African champion and FIDE Master ended on 6.5/9 and scored a 2436 performance. Perhaps his dedication was captured when he skipped an outing to prepare for his game with Adly. 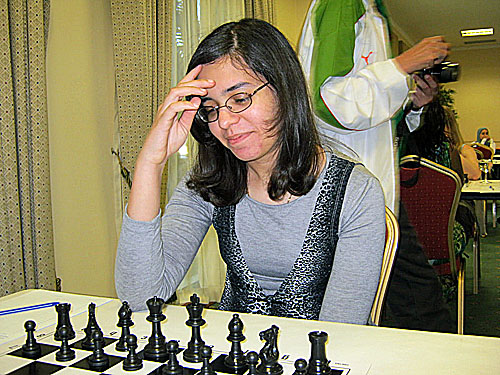 Khaled was challenged by Amina Mezioud of Algeria who held the tournament lead until the last round. Khaled won a thrilling last round encounter putting her in a virtual tie for first. When looking on the tiebreaks they drew their individual encounter, played virtually the same players except for one. In the end the last round victory, would be the deciding factor.

Melissa Greeff will also make the World Cup qualifier with an inspiring surge in the end. Going in as the top seed, Greeff had just completed her university exams and apparently had not prepared. After four rounds, she was 1/4, but ended on 4.5/5 (including a bye) to edge into a virtual tie with South African compatriot Denise Frick. The two played a two-game playoff which Greeff won 2-0.