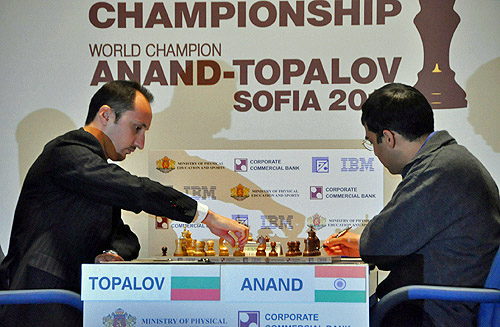 The match was finally underway. Fans and pundits wondered what Veselin Topalov would play in the first encounter against Viswanathan Anand… 1.e4, 1.d4 or 1.Nf3. The Bulgarian played 1.d4 and the World Champion offered the Grunfeld. What happened next was a tremendous shock. Topalov sacrificed a pawn for attacking chances. With black pieces underdeveloped, white prepared an onslaught with 18. f5 Qe5 19. Nf4 g5 20. Nh5+ Kg8 21. h4 h6 22. hxg5 hxg5 23. Rf3. There were many comments at the ICC on the moves 23…Bd7 and 23…Bb7. Clearly the latter move lost immediately.

The Drum to beat in Africa!