Round #7 Analysis: Armenia maintains the inside track on successfully defending their Olympiad title with four rounds left. They beat Russia on the strength of Gabriel Sargissian’s wild win over Alexander Grischuk. Armenia will get a surging France on tomorrow. Germany kept pace with Armenia, winning over Romania 2½-1½. China and the Ukraine battled to a 2-2 draw while Israel beat Spain 3-1.

FM Sunil Weeramantry is posing as the captain of the Sri Lanka team and stated that they got visas only one day before the Olympiad had begun. He is also paying close attention to his stepson Hikaru Nakamura who is playing for the USA team. 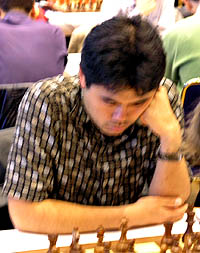 Weeramantry stated that Nakamura (right) was initially upset at his game with Zoltan Almasi of Hungary because he felt he was a bit better. However, upon further analysis, the game was unclear. Onischuk won the deciding game came of the match. Weermantry stated that this would bode well for Onischuk’s confidence since he lost a potentially drawn game in the Cuba-USA match. Weeramantry told The Chess Drum that Akobian has been the ultimate team player, cheering his teammates on, playing for points when needed, helping with analysis and keeping an overall positive outlook.

In the women’s competition, China maintained their lead after being held by the USA swapping wins on board #1 and #4. The Ukraine blasted the Netherlands 3½-½ to gain ground on USA, Russia. They are now in second place and have seemingly recovered from a shocking draw with Argentina in the first round. The women’s competition is shaping up to be as exciting as the men’s. Stay tuned!

African Diaspora: The entire African Diaspora is having a rough time at the Olympiad games. It was also reported that a Mozambican player was hit by a tram car. No other information was known. Egypt had a good day with a 4-0 washing of Malaysia. What is most glaring is the performance of Zambia. Amon Simutowe and Daniel Jere have to win both games in every round to earn a point. For the most part, they have been doing that, but it’s very difficult to have such pressure round-after-round. Uganda also has such a situation, but with less success.