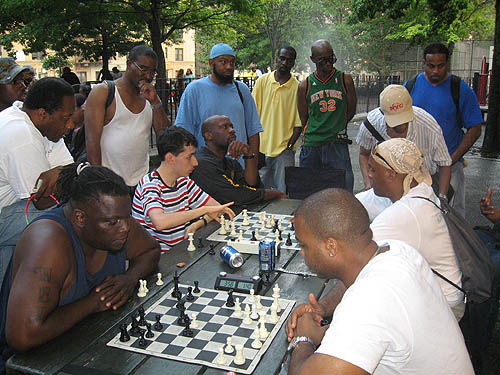 Chess Drum contributor Michael Williams sent this report about a trip to the famous St. Nicholas Park in Harlem New York. For those of you who don’t know, this park is famous in Black circles for being the place where many “Black Bear” Masters honed their skills. It is also the place where a young Maurice Ashley battled and had to often lick his wounds before returning with a vengeance. By looking at the pictures taken, it appears as if the place was in full swing.

Williams reports that IM Alex Lenderman was out there giving 5 minutes to 1:45 odds to park hustlers. He stated,

I personally didn’t see Lenderman lose a game, but some people said Clayton won a few outright. Farai, you can see him in one of the pics not playing, was given another park legend “Boka” the same odds and doing his thing. I heard Susan Polgar was supposed be coming out there on Sunday. I can tell that park is special… It was beautiful to be in that arena.

Zimbabwe’s FM Farai Mandizha was out there as well giving the same odds. He is becoming a legend in his own right. There is to be a blitz tournament at the park on August 23rd.