There were some tremendous individual performances but financial hiccups continued to hinder the development of chess in 2007.

The Uganda Chess Federation (UCF) was throughout the year rocked in a financial quagmire that saw national team players miss out on some major events that could have done much in improving the game’s image.

Uganda was poised to send a team to the All Africa Games in Algiers, Algeria for the first time but a chronic shortage of finance was the country’s undoing.

With the first quarter of the year gone, UCF had successfully organised four different tournaments and respective winners were selected to travel to Algeria.

UCF Publicity secretary Vianney Luggya lamented back then, that it wasn’t only the four different winners that proved competition was on the increase, but in the way new and young players, unknown to the chess fraternity were upsetting the perennial stars.

Players like Kenneth Ouma, Ssegwanyi, Joel Wegoye, Davis Agaba, Ivan Meri are just a few of those that defied the odds.

“We tried our best to look for sponsorship but it was too late. It’s very hard to approach a sponsor on short notice and expect positive results,” said UCF General Secretary Godfrey Gali.

The financial predicament continued to haunt UCF, with failure to raise numbers to honour the Individual Africa Championship invitational tournament in Namibia.

In another twist, UCF failed to raise Shs30m to host the Africa Junior chess event and forfeited their rights to Malawi.

Despite the financial troubles, there was some action on the chessboard that dominated the sports pages. 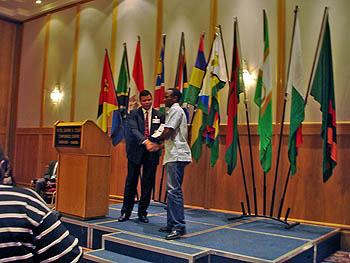 United Kingdom-based Steven Kawuma made the country proud with an impressive performance at the African Individual Chess Championships in Windhoek, Namibia.

FM is a prestigious title that precedes the International Master (IM) and later GM (Grandmaster).

There are many benefits associated with being a titled player. IMs for instance make a living by playing in invitational tournaments world over. They are given appearance fees on top of getting fully paid trips.

Kawuma then followed this up with a splendid display to become the Hampshire County chess king in November.

Kenneth Ouma came to the spotlight during the Liberations Open in January, where he came second to Shadraq Kantinti. It was his performances herein, dispatching perennial national stars like Moses Kawuma and Bob Bibasa that lured the sports scribes to vote him the sports personality for January and proved along the year, that it wasn’t a fluke.

Luzira Chess Club won their maiden national league title, dethroning Mulago Kings in what was a two horse race from the start. Busoga College, Mwiri also outmaneuvered 2006 winners Namilyango College at the Fr Grimes Schools’ Championship. Should the few stars improve on last year’s performances on the board, 2008 will be a year to behold.

The Socio-Politics of the First Move in Chess