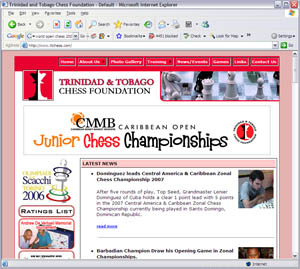 The Trinidad Chess Foundation is hosting the CMMB Caribbean Chess Championships on August 8th-11th. Edison Raphael has been publicizing this event and an announcement was made on The Chess Drum last month. I am scheduled to be in attendance and possibly IM Amon Simutowe. While there, I hope to be able to interact with the chess community in addition to battling with the likes of FMs Ryan Harper and Christo Cave.

Some of you may remember that Simutowe and I went to Jamaica for the Hale Chan Open in 2004 and we were warmly received. We both played in the tournament and the Zambian ace gave a simultaneous exhibition. (Here’s the photo essay) Caribbean chess has been making attempt to reach out and expose its players to a high quality of competition. Bermuda and Curaçao have been able to attract world-class competition and been able to offer good conditions. Trinidad and islands such as Barbados and Jamaica hope to do the same.

Many talented Caribbean players suffer from stagnation due to lack of resources to travel, but it may make sense to bring strong players to the islands. I don’t know many people who would mind spending some time on a tropic island playing chess.

9th All-Africa Games: Give us your Reflections!