The first I remember seeing the art of capoeira was as a Ph.D. student at Clark Atlanta University when some of the avowed Afrocentric students were “playing” on the yard. I had heard of this deadly art, but here were students moving rhythmically to the beat of the drum (atabaque) and the tune of the long, bow-shaped berimbau while performing a series of handstands, twists and flips. Of course, the art is very beautiful to observe, but the intricacies of what is taking place are easy to miss. Lost in the beautiful acrobatic movements are the feints, setups, sweeps, kicks and escape moves. 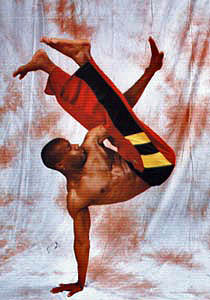 Capoeira can be likened to a chess match between two players with the objective being to fool your opponent to expose him or herself to a defenseless position to deliver a strike or blow. Beautiful sequences can be likened to a chess combination that is several moves deep. To the uninitiated, this Afro-Brazilian art of capoeira appears to resemble the art of “breakdancing,” an African form of dance popularized in the 70s hip-hop era. In fact, many breakdancers practice capoeira to gain more definition in the moves and better technique. 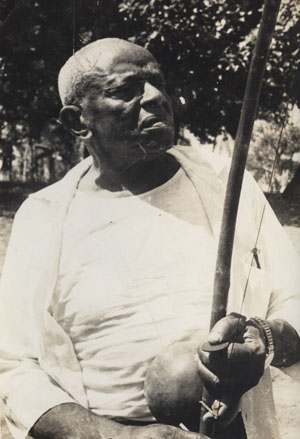 Manuel dos Reis Machado (1899-1974)
affectionately known as “Mestre Bimba,”
one of the pioneers of capoeira
It should be known however, that breakdancing is not capoeira. Capoeira is a genuine martial art with defensive countermoves, head butts, takedowns and powerful kicks, including those delivered from a handstand. The effectiveness of capoeira is highlighted by the constant movement in each player through the ginga (pronounced jinga). This staple movement entails a side-to-side movement with a back leg extended for a firm base and an arm shielding the face from blows. Some masters (mestres) instruct their students to practice the ginga for hours. In the beginning class, my capoeira instructor once showed us how difficult it is knock someone off balance from the ginga position as opposed to someone standing erect.

The flexibility of the ginga allows one to fluidly go into a defensive position (negativa or corcorinha), transition to deliver any number of the kicks (martelo, mei lua compasso, armada), counter with a sweep (banda), head butt (arpão de cabeça or cabeçada), or an escape with a cartwheel (aú). So many options from which to defend and attack. While these movements look beautiful when performed by a capoeirista, they are functional and not for show. The strategic movements and counter-movements are part of the unspoken dialogue between the two players… the pace of the dialogue is set by the berimbau instrument. 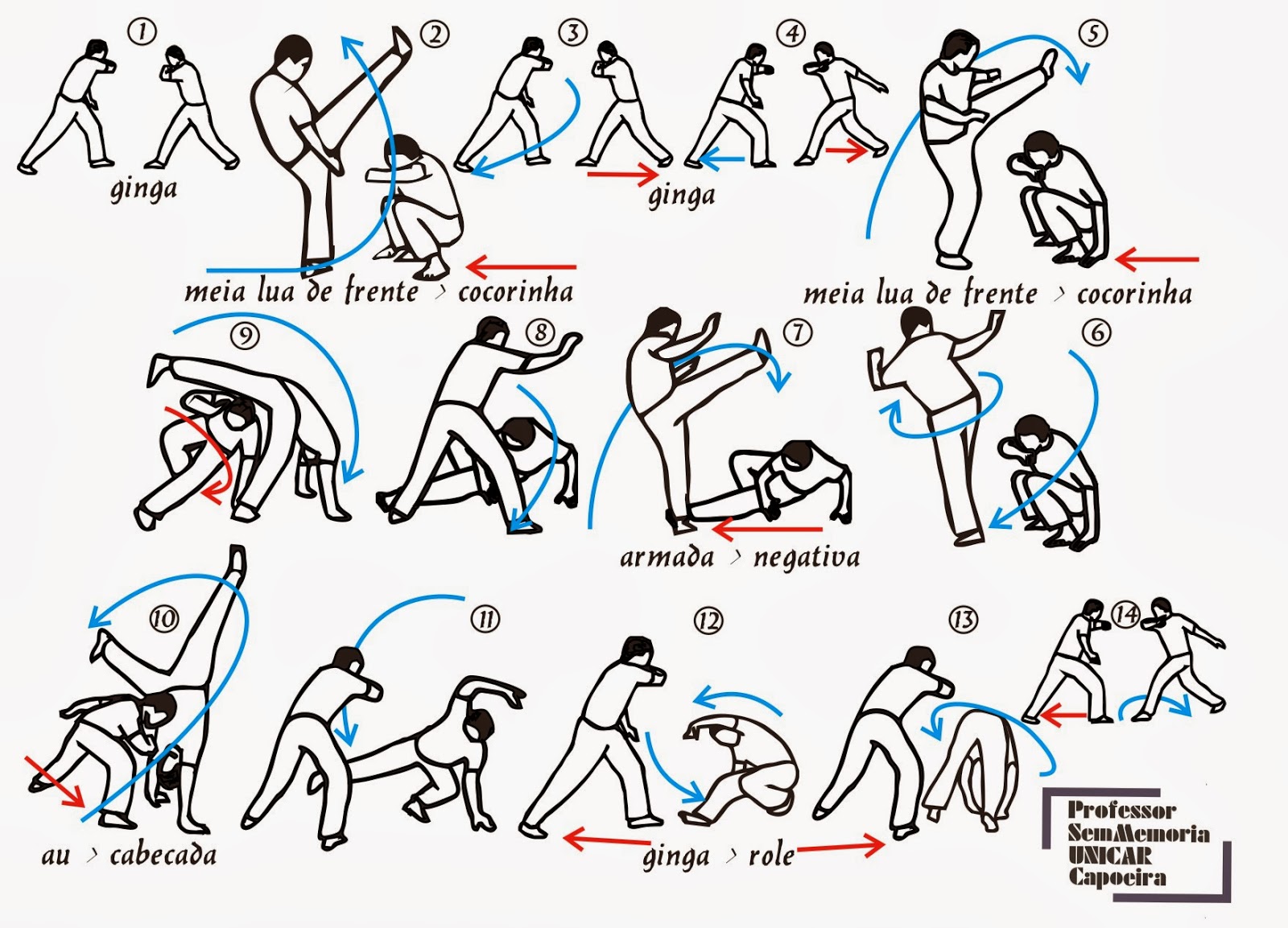 These capoeira sequences are akin to the sequences often shown in chess opening books. There are various attacks and defenses build into a sequence of movement, but a capoeirista can also improvise during a “roda” just as a chess player can deviate from “book” moves. Courtesy of Professor Ne Memroria UNICAR Capoeira

Each capoeira battle takes place inside the roda (pronounced ho-da) in which a group of capoeiristas encircle the two players. Each player has his or her own style which is expressed in the encounters. Some capoeira players are aggressive while others look for openings and counterattacks. Balance, mobility and flexibility are necessary characteristics for a good capoeira player. Watch this capoeira roda with advanced players to get an example of the sparring. Watch the attack vs. counterattack movements!

In the roda, you saw the capoeira players attempting different moves to attack, counterattack and evade… some players are very aggressive while others prefer to fight defensively. In chess, we use the same tactics and adjust our style accordingly. If we are facing an aggressive frontal attack, we counter on the flanks; when facing a flank attack, we counter in the center. Sometimes we give our opponent the impression that we are passive and tempt them to become overaggressive. They then leave themselves open to a counterattack as in the cases when a player pushes his or her pawns forward for a “pawn storm.” 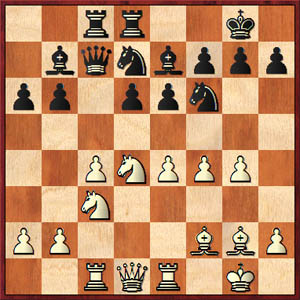 White takes the aggressive stance and black crouches in the flexible, defensive “hedgehog”…
no piece or pawn past its third rank
One signature example in chess is the hedgehog defense, a formation that creates a firm, flexible base with opportunities for vicious counterattacks and exploitation of aggressive attacks. Notice in the diagram that white has flung his pawns forward in an aggressive manner while black has maintained “the hedgehog,” a flexible, but compact stance. Black holds this position until the opponent exposes himself to a counterthrust in the center or on the flanks. There are many other methods of attack and defense as outlined in the chess openings that we prepare.

The same philosophy occurs in capoeira and a number of sequences have been designed to show the move-countermove variations. One set of variations or “lines of play” were devised by Mestre Bimba as a way of learning how to face various situations (see sequences). Two popular styles of capoeira have different philosophies and thus, different dialogues: Angola (slow-paced, lower to ground) and Regional (faster, more acrobatic). I have read articles where capoeira is compared to other games including poker. However, the subtleties seen in chess including the psychological aspects of the game are more compatible with capoeira than in a game like poker where the game is based on strict probability.

One of my most exciting experiences was to see capoeira played in Brazil during a visit to the Zumbi University. To see experienced players engage in aerial and ground combat with handstands and agile footwork is amazing indeed! The object of capoeira game is not to hurt your opponent, but to outwit them into defenseless errors. The stronger you get, the harder it is for an opponent to catch you off balance. Technique is often primary to athleticism seen in these battles. 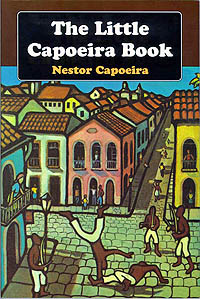 In Brazil, capoeira evolves from the rich Bahian culture. The art spread into the major centers such as São Paulo where I witnessed the demo. Watching these capoeiristas during the roda, I didn’t understand the intricacies of the game… only the athleticism and the martial arts. Only when I read The Little Capoeira Book (left) by Nestor Capoeira, did I began to appreciate the depth of the philosophy.

Capoeira is not only filled with a rich cultural history, but it is artistic, rhythmic and is a tremendous boost to the mind, body and the spirit. It would do a chess player good to take some type of martial art to improve concentration, but few martial art forms allow the type of creativity of expression as does capoeira. The Afro-Brazilian art is practiced throughout the world and despite losing some of its authenticity, it remains as a mainstay of Afro-Brazilian lifestyle and culture.