The table is set… both Ding Liren and Teimour Radjabov will meet in the final match of the 2019 World Cup. Both also qualify for the Candidates tournament to be held in the early part of 2020. Radjabov, who returned from a hiatus, upset Maxime Vachier-Lagrave to advance. Ding, the top seed, defeated compatriot Yu Yangyi to advance. Yu defeated both Ian Nepomniachtchi and Nikita Vitiugov, but was certainly fortunate in the latter match.

The Ding-Yu match raised speculation that the Chinese would decide that Ding would lose the match so that two Chinese could be in the Candidates. Ding is already poised to qualify by rating. The British newspaper The Guardian displayed no class when hinting that Chinese would engage in collusion so that Yu would advance. This is a very cynical view and certainly insulting to the Chinese Chess Federation. 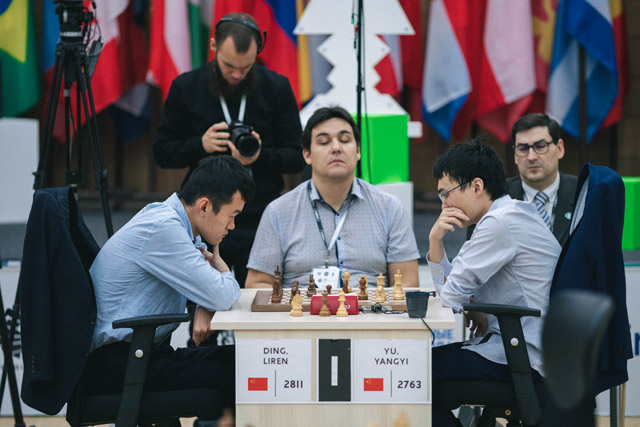 Ding Liren and Yu Yangyi battle in the semifinals, a historic account. Few have mentioned the historicity of two Chinese players making the semis for the first time. What makes the feat more remarkable is that only seven Chinese players entered the World Cup. Photo by Kirill Merkuryev

There were two interesting classical games. The first was tense but ended in three-fold repetition; the second ended after black had a perpetual check. This game was a Nimzo-Indian which ended up with a strange position. The commentators warned the fans not to try these type of strategies in their games. White’s king was sitting on e1 next to an open d-file and after 18.Rh3 had lost all castling privileges. The bishop was also on f1 and the e-, f-, and g-pawns had not moved. Meanwhile, black’s pieces were active.

White’s exposed king seemed to be in trouble, but would try to help shepard the pawn advantage to victory. Unfortunately, the king had no shelter from the checks and the two agreed to a draw. In the first rapid tiebreak, Yu Yangyi took a risk with 8.d5?! and lost the initiative after 8…Na5 and 9…Nxc4. Black had an extra pawn, but Yu was able to hold the balance. The next game would be a fierce fight. 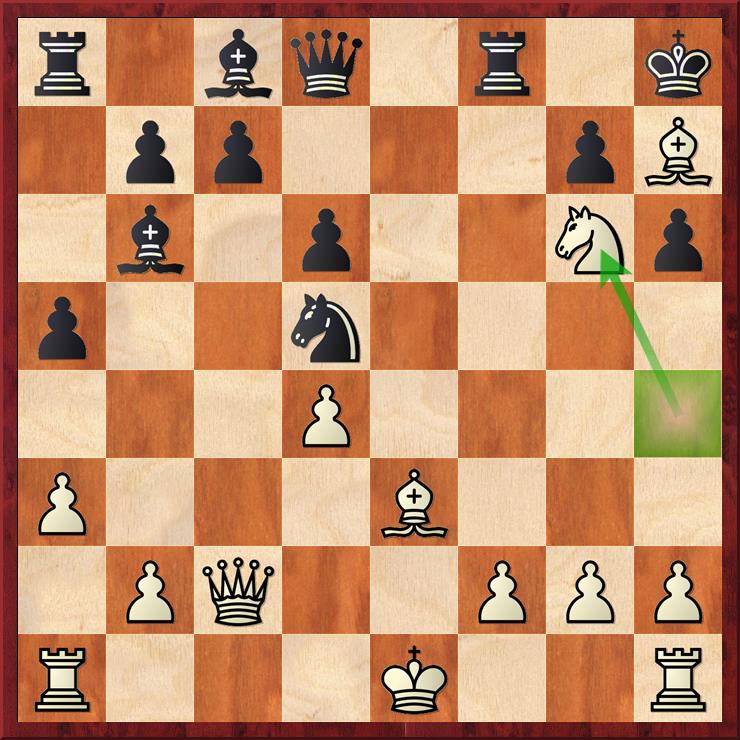 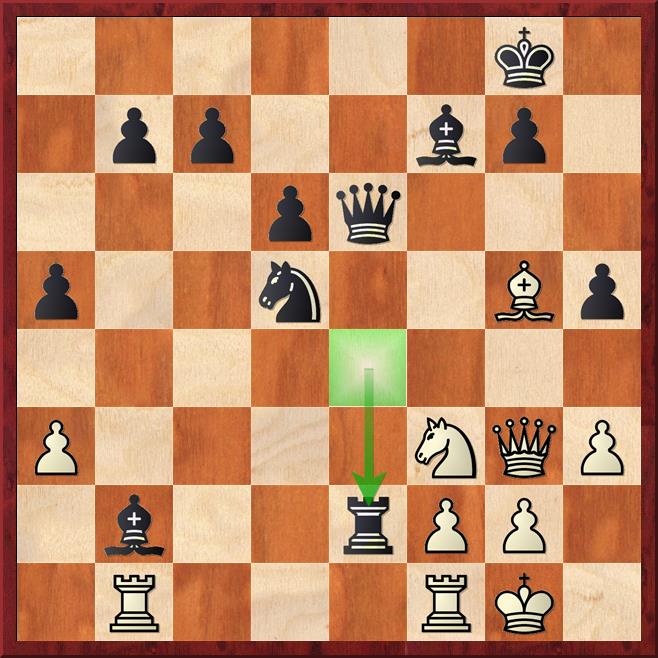 In the second tiebreak, Yu trotted out a novelty in 13…Nd7!? and proceeded to sacrifice the exchange after 16…Nxd5!? 17.Bh7+ Kh8 18.Ng6+ (diagram 1) Kxh7 19.Nxf8+. It was interesting how deep Yu’s preparation was as his pieces were swarming white’s position. Black collected two pawns for the exchange, but made a miscalculation 26…Qe6 instead of the more active 26…Qxd4. Despite the inaccuracy, black looked fine after 29…Re2 (diagram 2).

A tactical melee ensued and black was holding the dynamically-equal position until he had to blitz out 33…h4? driving the imprisoned queen to an active square with 34.Qg5. Perhaps black should bail out with 34…Ba2 winning the exchange back and heading for a probable draw. After 34…Rxc7? Yu missed that 35.Rxb2+ Qxb2?? would be met by 36.Qd8+ with a winning position. Instead black remained down an exchange in a clarified position. With white’s rooks ready to invade the 7th rank, black resigned.

“Ding also refuted the conspiracy theory that he might lose on purpose today, to get two Chinese players into the Candidates’ tournament. That was because if he hadn’t qualified via the World Cup, Ding would have almost certainly qualified by rating.”

Many believe that Ding is a rightful challenger to Magnus Carlsen. No less a personality than Garry Kasparov touted Ding’s worthiness after beating Carlsen in a tiebreaker during the 2019 Sinquefield Cup. This is all the more important since Carlsen will not be able to settle for draws in the classical games and overwhelm in the quicker time control. He defended successfully against Fabiano Caruana using this strategy. He was even criticized for not pushing for a win in a better position in game 12. 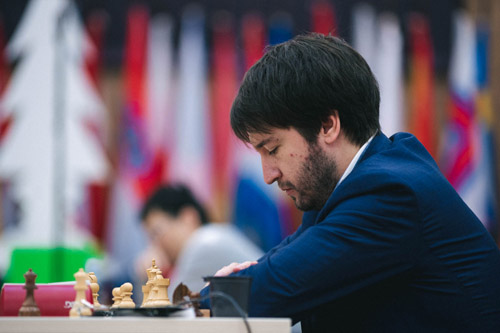 After a hiatus, Teimour Radjabov is #10 in the world
and is going to the Candidates.
Photo by Kirill Merkuryev

Before we declare Ding as the challenger, he has to win the Candidates. Teimour Radjabov will have a long-awaited shot at the title. Radjabov started a family and withdrew from the professional circuit for 13 months, but did play in the Batumi Olympiad. He will have a chance to redeem himself from his last Candidates appearance in 2013 where he scored an abysmal 4/14 (+1-7=6). Beating MVL was quite a feat given the Frenchman’s penchant for deep preparation. Radjabov played a brilliant attacking game squashing hopes for the Frenchman to qualify for the Candidates.

Radjabov will be the underdog against Ding, but it is fine form. The match resumes on Monday.