The Chess Olympiad is less than two months away and it will be a very exciting event as usual. However, what will make the event more compelling is the FIDE Presidential elections. There are three candidates remaining after Kirsan Ilyumzhinov bowed out of the race after being adamant on his quest for reelection. FIDE Deputy President Georgios Makropoulos, GM Nigel Short and the latest entrant Russian-backed Arkady Dvorkovich will be standing for election. There are rumblings about other possible candidates, but additions at this point are unlikely.

Of course, there are other continent-wide elections and one of the most contentious will be the one to lead the 47-member African Chess Confederation (ACC). Three candidates have vowed to stand for the position: incumbent Lewis Ncube (Zambia), Dr. Essoh Essis (Ivory Coast) and Tshepo Sitale (Botswana). Sitale has posted an extensive platform which touts good governance, transparency, branding and fundraising as a few of the cornerstones of his platform. Recently Essis announced his ticket which promote similar objectives in his very attractive campaign dossier. He also gave an extensive interview here at The Chess Drum.

Typically what will distinguish these candidates from each other (and the incumbant) is how well they build coalitions. Relationships on the African continent are very complex and the last election in Tromso, Norway demonstrated how loyalties can become divided. In fact, members of the same federations sometimes support different candidates. The reality is that there are no clear voting patterns and the three candidates will have a challenge in securing a standard majority. Not to mention that the issue of “proxy votes” is still unresolved. 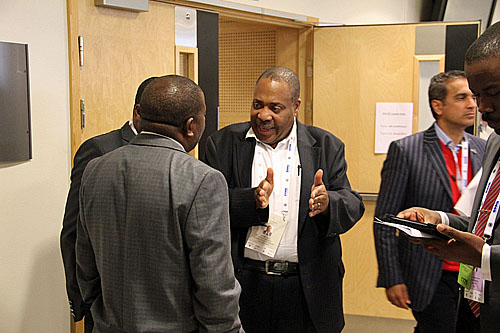 Lewis Ncube of Zambia (center) is the incumbent FIDE Continental President for Africa. Here at the 2014 Chess Olympiad Ncube chats with Kezzie Msukwa of Malawi. Photo by Daaim Shabazz

Ncube, long associated with Ilyumzhinov, has now thrown his support behind Dvorkovich. Incidentally, Ilyumzhinov was suspended by FIDE and subsequently lost any credibility to assume the position. While Makropoulos seeks to distance himself from the Ilyumzhinov era, Short has been on the attack accusing him of continuing the agenda.

It is amusing to see Mr Kirsan-Continuity (a.k.a Makro) doing things he has never done before – like providing his electoral analysis to soft-porn sites, and now joining twitter. It strongly suggests that, despite all the cocky bluster, he is far from sure about the outcome.

The soft-porn site Short referred to is the one run by Canadian Grandmaster, Kevin Spraggett. Makropoulos has indeed used Twitter with the support of his running mate IM Malcolm Pein, Short’s fellow compatriot. Exchanging barbs with Short, Makropoulous even solicited input from Garry Kasparov, a strong critic of the Russian bloc.

I would appreciate your prognosis @kasparov63 if I hadn’t already announced that I will win from the 1st round. @Advorkovich has no chance, in spite of your friend's @nigelshortchess efforts to help him by dividing some western votes.

While all of this is stewing, the African campaign is stepping in high gear, but there were other issues besides the ACC candidates. There was a very informative article written on Africa Chess Media titled, “The Chess Olympiad, Africans and Finance.” The article details the history of subsidies for African federations and the predicament of securing those funds every two years.

Why is this of utmost importance? These funds may have an impact on the ability of federations to attend the Olympiad and thus affect the election results. Africa Chess Media reported on the one million two hundred thousand euros (€1,200,000) that FIDE is using for federations needing travel subsidies. Here were questions raised:

As far as the list, FIDE had released details of travel subsidy on July 13th.

FIDE is pleased to announce the travel subsidy for participants for the Chess Olympiad & Congress, Batumi, Georgia 2018. All federations will receive more travel subsidy in 2018 than they did for Baku in 2016. Many teams that did not receive a team grant in 2016 will do in 2018. They are Nigeria, South Africa, Bhutan, Chinese Taipei, Malaysia, Thailand, Iceland, Ireland, Luxembourg, Montenegro, Poland, Portugal, Romania, Scotland, Serbia, Slovakia, Slovenia, Ukraine & Wales. In addition the ECU will be paid 30,000 euros to assist federations that are not receiving any travel subsidy. (details, country listing)

While FIDE finances suffered as a result of sanctions from the U.S. Department of Treasury, the organization is seeking to rehabilitate its financial standing. The sanctions resulted in FIDE’s limited ability to raise and deposit funds for its operations. In previous Olympiad periods, African federations have been mired in financial shortfalls, visas glitches and other logistical challenges. It appears that these issues are not yet sorted out and many will require resolution.

Deputy President Georgios Makropolous in a fierce exchange with Dr. Essoh Essis during FIDE Congress in 2014. Both are campaigning for office. Could they work together if they assume their respective offices? Dr. Essis believes so. Photo by Daaim Shabazz

In terms of the presidential election, a recent ChessBase article showed the respective tickets and the distribuion of nominations. Makropoulos had 64 nominations for his ticket. This is more than the other two parties combined (Dvorkovich, 13; Short, 6).

Arkady Dvorkovich entered the race just one month ago and is a relative outsider in this campaign. Although not a chess competitor, he is an able chess politician with the weight of the powerful Russian Chess Federation, where he served from 2007-2014. Meanwhile, Nigel Short has presented his ticket to all federations and launched his hashtag and website called “cleanhands4fide.” However, it’s still too early to make an assessment given the dynamics that will play out at the General Assembly and Congress.

It is clear that this will be a very contentious campaign and a bitter election. Each of the candidates will have to answer questions about their executive experience, record of effectiveness and ability to build coalitions. One of the unknowns will be whether the elected ACC President can make any progress in working with the new FIDE President. There are some complicated relationships brewing and it will be interesting to see who supports whom.

(Update: There have been accusations by Makropoulous of tampering through “bribery” and a FIDE anti-corruption committee has been set up to head off such these attempts. Both Dvorkovich and Short scoffed at these efforts and a Twitter war ensued. An interesting article run by chess.com targeted some African officials of receiving tickets to the World Cup in Russia from Dvokovich.

It appears that Africa is the only region being targeted as recipients of “gifts” which seems to be a bit unbalanced. Is Africa (again) being made the scapegoat of failings of the electoral process? It appears that many still fall prey to universal stereotypes and cannot believe that an African can attend the World Cup on their own funds. It is apparent that Africa is painted as a destitute continent, but assuming that all Africans are poor is very presumptuous.)