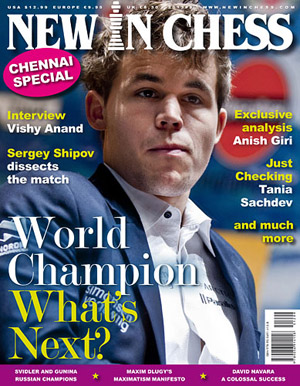 It is easy to know what the cover story of latest issue of New in Chess is about… Magnus Carlsen, of course! A month after winning the World Championship, Carlsen graces the cover for the second consecutive issue (which was mentioned in the letters to editor). He has made 4/8 covers this year in New in Chess and was perhaps the story of the year.

Asserting his dominance over the past two years the culmination of his storybook career continues with a convincing 6½-3½ victory over Viswanathan Anand who held the crown since 2007. Many are hoping that Carlsen’s victory will give chess a refreshing image meaning sponsorships and a higher profile. Anand, for his part, has been the champion who stabilized the crown for six years and defended honorably.

The question that will become important is whether Carlsen will be able to win every tournament as expected. If he begins to falter in tournaments, chess fans will say he is simply bored with chess and suspect that he will lose motivation. How does he keep his momentum? It will also become apparent just how difficult it is to accomplish what Mr. Viswanathan has done… defended crown in three matches (Vladimir Kramnik, Veselin Topolov, Boris Gelfand). 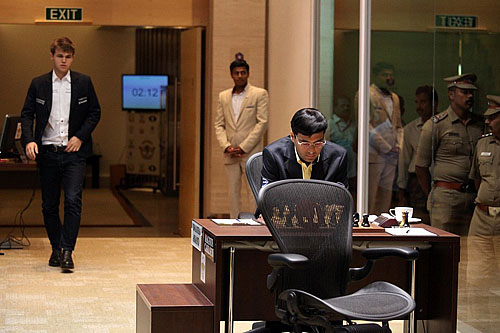 This issue gives an inside look at the championship including the electric environment, national euphoria of the match and the side controversy concerning Kasparov. There is also a sidebar about Carlsen’s mysterious seconds, a riddle never completely solved. The decisive games were annotated by Anish Giri who recently took an editor’s position with the premier magazine. The games were done with his usual youthful ebullience.

Dirk Jan ten Guezendam conducted a wonderful interview of the beleaguered champion. There were a number of details discussed of the match including his training, the assembly of a new team, the pressure that Vishy had to endure in Chennai and his future plans. Top chess analyst Sergey Shipov gave a view of “Why Anand lost and Carlsen Won”. He categorized his points is in analyzing respective teams, player psychology, Vishy’s legacy and championship cycle. One may be able to find issue with some of his analysis of the match, but it’s an interesting read.

No, this is very painful obviously. It’s mainly the frustration of not being able to see something through, but that’s how the whole year has been. It’s kind of hating that.

While one can make the argument that Russia is no longer the chess power it once was, it is still influential enough that its national championship is a feature story in New in Chess. Looking at the recently ended World Youth and the current youth ratings, Russia’s is still trying to find that next crop of talent. Meanwhile it is attempting to rebuild until it recovers its glory. We shall see in Tromso. Meanwhile, Peter Svidler (now a seven-time champion) and Valentina Guinina will carry the champion’s banners for another year.

The European Team Championship is a serious deal. Star-studded lineups assemble every year for the world’s strongest team event. In this year’s event a nondescript NOVY BOR team led by Czech Republic’s David Navara took the prize. The fifth seed bested several teams including high-powered Russian teams and the powerful SOCAR sporting a side of Fabiano Caruana, Veselin Topalov, Shakhriyar Mamedyarov, Anish Giri and crew. It is interesting the Navara (who is generally not verbose) wrote a very wordy article on the ETC accompanied by a couple of annotated games. Perhaps breaking the text up would have helped the readability. Still a good article showing the making of a champion.

Lastly, “Just Checking” gives us a candid look at Indian International Master, Tania Sachdev. You may be interested in knowing her favorite color or favorite music genre in case you meet her. 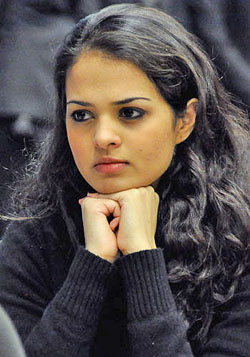