Former World Champion Garry Kasparov recently embarked upon an Africa tour covering several countries. Since his retirement in 2005, Kasparov has not rested. He has been a prolific author and has been active in the political realm as a prominent opposition to current Russian President Vladimir Putin. In addition, he has been active in chess politics. An ardent opponent of FIDE’s current administration, he teamed with former World Champion Anatoly Karpov in the 2010 FIDE Election in an attempt to unseat Kirsan Ilyumzhinov. In the end, Ilyumzhinov was able to withstand a valiant effort by the K-K duo and continue his leadership of the chess body. Some say Karpov simply had not convinced the body that his administration would offer any substantial upgrades.

Kasparov continues promoting chess through his Kasparov Chess Foundation (KCF) and has traveled throughout the world setting up academies. He is in the midst of visiting several African countries (Kenya, Uganda, Rwanda, Malawi, Zimbabwe, Zambia and South Africa) to promote the essence of chess development through his foundation. Kasparov has successfully launched an initiative in South Africa and has his eyes on expansion on the continent. It goes without saying that Africa is an important continent in the FIDE electorate.

Every four years, suitors travel to Africa with a platform, words of hope and in some cases, leave a cache of sets, clocks and even pay for Olympiad expenses. This has become the regularities of FIDE politics. However, Africa deserves more than these tokens every four years. In 2014, there is another FIDE election and there are reports that Kasparov is considering a run for FIDE Presidency. This would be an interesting, but not unexpected given Kasparov’s battles with FIDE in recent years.

Prior to his entry into chess politics, Kasparov had not had much interaction with Africa. In more recent years, he has aggressively campaigned on the continent to convince the electorate that an alternative administration would be more beneficial for chess in general and for Africa in specific.

What does a Kasparov visit mean for Africa?

Kasparov’s visit to Africa means that he is attempting to make his foray into the heart and minds of the electorate. Doing it under the guise of chess development is a logical tactic. While he may not promise to pay for Olympiad expenses and send other types of material gifts to officials and players, his goodwill could go a long way into seeing that he is looking for long-term growth in the grassroots. His presence and stature on the African continent does help raise the awareness of chess which could have an impact on sponsorship at the senior level and growth at the youth level. While this plan is long-term, it provides a plan for foreseeable growth. 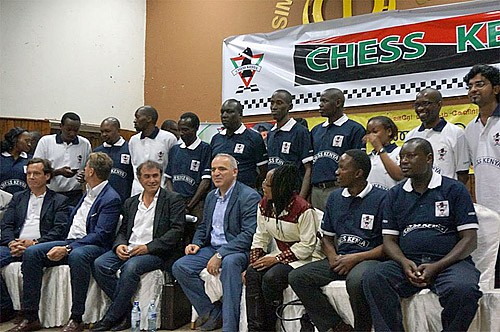 If we look at the current situation, we should ask, “What has FIDE done recently for African nations?” It is a fair question. Nearly four years ago, Ilyumzhinov was gripped in a bitter fight against Anatoly Karpov and decided to extend resources to promote his platform in Africa with various meetings and a meeting billed as “FIDE African Seminar“. Ilyumzhinov won again, not merely on the strength of the African vote (as sometimes perceived), but by building broad-based support to market his incremental improvements.

In the last couple of elections there has been a lot of talk about the voting system and the fact that it should be reformed in order to give the larger chess nations more voting power. Karpov had proposed such an idea and even suggested a Security Council for chess. This proposal may have cost him votes since African nations represent perhaps a bloc of 30-35 chess nations (some delinquent in dues). This notion seems to be in contrast to the spirit of FIDE which prides itself on the equality of nations… “we are one people” goes the motto.

The FIDE General Assembly seating is arranged by alphabetical order. At the 2012 assembly in Istanbul, notice African federations clumped together in the back of the hall. Why was this not corrected? This is not the first time. Photo by Daaim Shabazz.

To strip African nations of their equality would of course give powerful nations more control and thus render the needs of developing countries insignificant. Why would anyone then need to listen to Africa’s pleas? This same question should explicitly be posed to Kasparov. Hopefully, Kasparov understands that the current voting structure is still important and he must NOT call for a abdication of one-nation, one vote system. This is the hallmark of democracy that he champions.

Would Kasparov be an Improvement for Africa?

One should ask this very important question… “How would a Kasparov administration be an improvement over the Ilyumzhinov administration?” Before answering this we must analyze what FIDE has done for Africa in the past four years. This will be a main question for the Ilyumzhinov campaign and they should produce graphs and statistics to show FIDE progress on the continent. FIDE Vice President Lewis Ncube (Zambia) will probably be asked to produce this report. 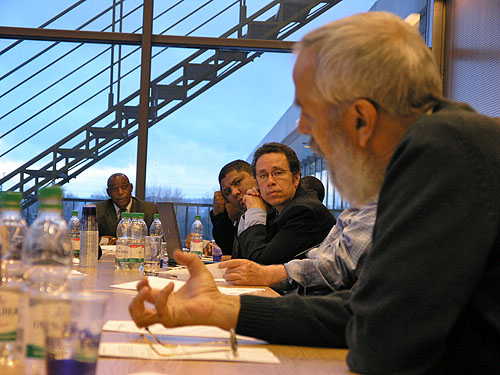 While the 2013 African Championships were an organizational success by host Tunisia, only eight African nations participated. At the 2012 FIDE General Assembly, there were new African federations announced but, their activities are often without adequate support and resources. Thus, there should be more discussion on CACDEC resources, sponsorship opportunities and specific academies to help develop African talent.

What qualifies Kasparov to sit at the helm of the world’s chess body?

How does Kasparov plan to improve on this record? While in Uganda he stated, “If chess is introduced as part of the curriculum in schools, there will be a difference in this country in the next five years. Chess empowers one with both knowledge and ability to think out of the box,” offered Kasparov.

We have heard the merits of chess education many times, but note that he did not say “difference in chess strength”… he said “difference in this country”. Very powerful. If this is his plea then we will have to wait and see, but we also have South Africa as a test case with “Moves for Life” program. Other federations such as Uganda and Ethiopia have signed MOUs to support Chess-in-Schools. 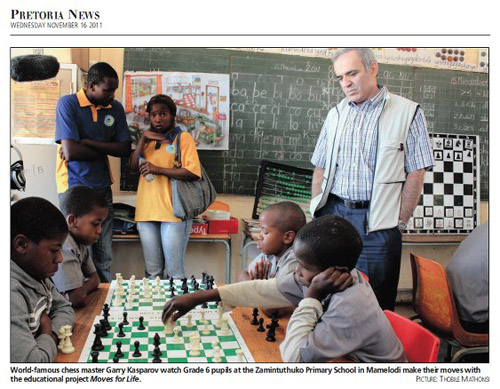 Africa must ask the tough questions!

One can ask whether Kasparov will be an advocate for Africa and developing chess countries the way Florencio Campomanes was or will he merely focus on professional chess? What qualifies Kasparov to sit at the helm of the world’s chess body? Will he win the vote only to become beholden to Euro-American bloc? Can he convince world-class players that Africa can be a capable destination for high-level tournaments (and provide logistical support). Not since the 2004 FIDE Knockout in Libya has there been a tournament (on African soil) touting a strong field of world-class players.

Regions such as Asia and the Middle East wield increasingly important influence while Latin America and the Caribbean will also vie for attention of candidates. It is also a fact that the African bloc cannot be ignored. Africa has to be ready with their list of demands. At the end of the day, African federations have to ask the question, “Are we much better off (as a continent) than we were four years ago?” It’s your move Africa.