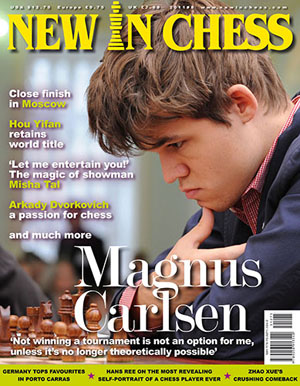 (Note: The latest New in Chess came out while I was still traveling abroad so I will give an overview of this issue.)

A lot can happen in a couple of months. Magnus Carlsen won the Tal Memorial and ended the 2011 campaign in spectacular fashion. He will join a strong field (2754 average ELO) at the Tata Steel and hope to begin the year as he ended. Carlsen had to play another catch-up race in order to win the Tal Memorial tournament. He clinched the victory over Hikaru Nakamura, his nemesis.

In the last issue we excitedly discussed the relationship between Nakamura and Garry Kasparov (see link). That relationship went up in smoke in few months. It was at the Tal Memorial that Nakamura, when asked about his relationship with Kasparov, spoke rather dismissively about the value-added that the World Champion could provide. 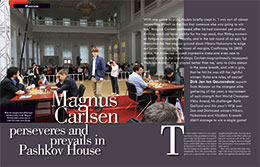 Immediately after this tournament, the ties were officially severed. Nakamura has shown glimmers of sparkling play, but has bouts of inconsistency. However, the Tata Steel tournament starting in a few days, he will be looking for a solid result. After losing his second student Kasparov certainly didn’t endear himself to fans when stating that,

“It is clear that Carlsen is the now the best player in the world. There is no question about that. The match everyone would like to see now is one between Magnus and Aronian.”

Aronian? Is he the World Champion? Is Kasparov so sure EVERYONE wants to see Carlsen-Aronian. What about Anand-Carlsen? That would certainly be the most-anticipated event in quite some time. Aronian is certainly a future contender, but for one World Champion to disrespect the sitting World Champion in such a manner is objectionable. Book-writing and lecturing (and not coaching or commentating) seems to be the best role for Kasparov these days. 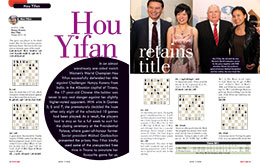 Hou Yifan’s crowning victory at the Women’s World Championship got a well-deserved segment. Hou scored a resounding victory over a beleaguered Humpy Koneru who lost her third straight match against the Chinese phenom. In fact, this match was never in doubt as Hou bolted out the gate to a three-point match lead before the last two games were annulled. With a victory for the Chinese women in the Women’s World Team Championship along with Zhao Xue’s dominant win (9.5/11) in the recent Grand Prix, it appears the Chinese have solidified their dominance in the women’s circuit. Ju Wenjun is also making great strides as she came in second (7/11). Zhao’s victory is also featured with her ebullient style of annotation. 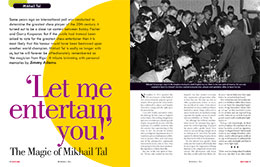 A very interesting article on Mikhail Tal’s generosity toward chess featured the side of chess players we don’t often see. We are used to the intense nature of chess and even Tal’s famous glare at his opponents, but this story showed another side to the former World Champion… one who wanted chess players to enjoy the experience that both are sharing in that point in time. This article told many interesting anecdotes about Tal’s exploits including a not-so-spectacular simul he gave (+12-4=8). There was a trademark game played against J.K. Jones that is certainly worth deep study. It features a series of trademark Tal sacrifices. Fun!