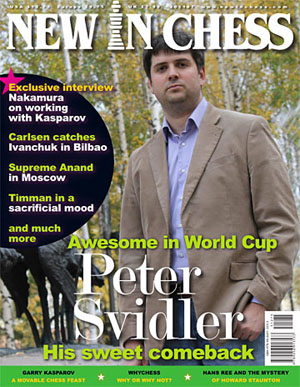 The big story in the latest New in Chess has been the collaboration between America’s top GM, Hikaru Nakamura and former World Champion, Garry Kasparov. There were rumors circulating for the better part of a year, but they came to the surface after an Nakamura gave an interview to Macauley Peterson in which he said, “I am working with Kasparov.” The secret was revealed by the man himself.

There have been reports giving a chronology of how this alliance transpired (via Rex Sinquefield), but the New In Chess article fills in the intricate details. Kasparov’s column also makes mention that the alliance had begun around the Tata Steel tournament which Nakamura summarily won. 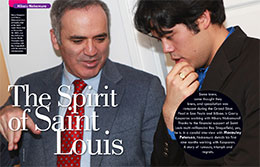 This development has gotten the attention of many players. Vladimir Kramnik was bemused when the story broke because he assumed everyone knew. However, the world’s highest-rated player Magnus Carlsen had been skeptical. Finally he spoke on the topic in a somewhat contentious and dismissive tone. There was no hint that Carlsen felt the alliance would bear fruit.

“I am surprised, especially since I never got the impression that Kasparov had a great deal of respect for Nakamura’s chess talent. This is why I have been reluctant to believe the rumors of the two working together.”

Carlsen went on further to say that he doubted that the alliance would have much impact. This is despite his admitting that Kasparov’s services were helpful. The upcoming Tal Memorial will be the “tale of the tape” as there will be a bit of tension in the air between these two rivals. 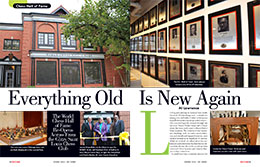 While we on the topic of Rex Sinquefield, the new issue gives a nice account of the newly-opened World Chess Hall of Fame. Already the mind of perhaps the most elegant club in the world, the retired financier has raised the standards of chess history by opening the three-story museum replete with a fascinating array of exhibits including vintage chess sets. I was at the opening of the World Chess Hall of Fame in Miami, Florida. While that was an impressive showing, this building will certainly raise the profile of chess to an elite level.

Peter Svidler has certainly had a banner year winning the Russian Championship for the sixth time and topping that will his impressive win at the 2011 FIDE World Cup. The cover story shows Svidler with his trademark hoop earring. The 128-player event had many highlights and fantastic games. Samuel Shankland’s upset win over Peter Leko was featured.

It is interesting that Shankland had considered giving up chess before he had a string of strong results. The article also covers the round three controversy between David Navara and Alexander Moiseenko and Judit Polgar’s epic battle with Leinier Dominguez. Polgar seems to be back in form and tips the rating scale at 2710. 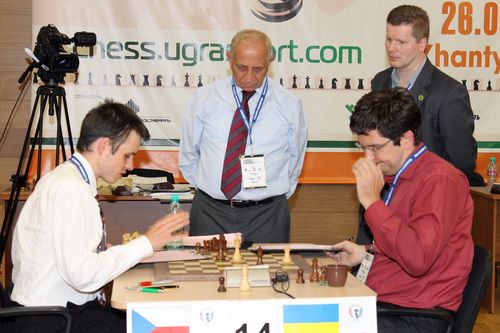 David Navara had spent 40 moves to get a winning position and one move before mate or Alex Moiseenko’s resignation, he offers a draw! Photo from https://chess.ugrasport.com/.

Other good articles were Jan Timman’s entertaining article on “Piece Sacrifices in the Sicilian” and Kasparov’s usual rant against Kirsan Ilyumzhinov. He touches on a variety of topics including poor tournament formats and the dearth of young talent breaking through. He even commented on a game of his new charge in Vallejo-Nakamura and discussed two recent exhibition games of his own.

Ashley in Jamaica for Caribbean tour