Tomorrow Viswanathan Anand will set foot down on the African continent. This is reportedly his first visit which is significant for a number of reasons. 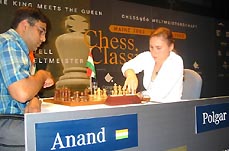 Elite players and chess media typically pay little attention to the African continent. Thus, chess struggles for attention from sponsors. However, Anand will not be the first elite player to visit Botswana. GM Judit Polgar visited Botswana back in 2001 and gave a couple of simuls and a workshop.

Unfortunately, there was little fanfare in the international media of Polgar’s visit. African media was equally abysmal in the coverage despite Polgar’s prodigious and historic accomplishments. GM Nigel Short has also visited Botswana as well as Zambia, but both were for political reasons and in ended controversy. Short had visited Kenya earlier and was warmly accepted.

Let us hope African continent will not miss this opportunity and that Anand will get a rousing welcome and African hospitality! Congratulations Botswana for bringing a chess hero to Africa!